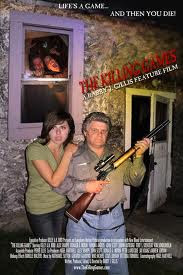 A while ago I reported that Barry J.Gillis's horror film The Killing Games had been banned from the Edmonton International Film Festival (here), and it is still banned there. Luckily not everyone is full of censorship as them as the Calgary International Film Fest has confirmed it will be a part of their line up on Saturday September 22nd joining other horrors such as Oscar nominated Canadian director Deepa Mehta's Midnight's Children and Brandon Cronenburg's Antiviral.

The Killing Games is about a man who decides to take the law into his own hands after his daughter witnesses a double murder and only narrowly escapes.

Gillis commented saying "Calgary gets upwards of 50,000 fans attending their festival. Tourists, fans, great films, and the best parties...I mean, this is huge for us". Regardless of whether The Killing Games is any good or not I am pleased that Gillis has found a way for his film to be seen.

The Calgary International Film Festival is in it's 13th year (spooky!) and runs from the 20th September to the 30th 2012.
Posted by Daniel Simmonds at 14:19

There is a difference between banned and rejected. Low grade writing and reporting.