There are many bad Indie games as I am often want to say, and yet I feel the need to review them regardless of how little anyone cares, so here are a chunk of horror Indie games for your perusal... 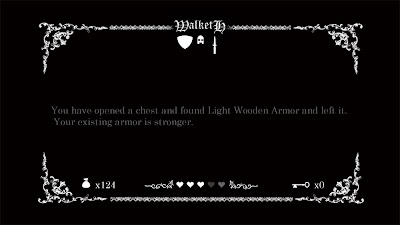 In Walketh you play as an adventurer stuck deep below ground in a dark dungeon. Much like In the Pit the screen is pitch black, you can guess your surroundings by the noise the adventurer makes when there is a wall in front of him. The game has a nice style to it, with some mournful title music. All in all it is a bit frustrating not really being able to tell where you are going or what you are doing.

Of Steel and Sorcery 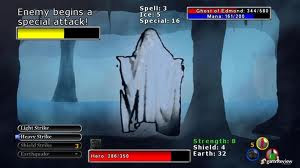 Another fantasy style game, this time a old school turn based RPG. The problems first arise when you see the art style, it is all made up of hand drawn static images that while better than I could draw still look terrible. The game starts with a never ending fight against an awfully drawn giant eagle, then after a bit of story you have to fight a bad looking ghost. As I fought a slime in a swamp, and then a spider in a dungeon I realised this is a stripped back RPG. There is no exploration, shops, or other things to do, just a series of boring over long fights punctuated by brief story segments. Not too keen to be honest. 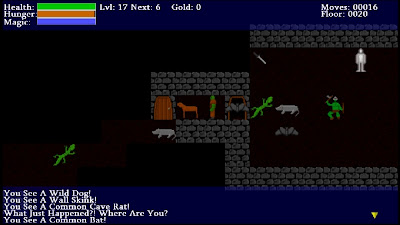 With a name so similar to Silent Hill I admit I did kinda hope it would be a survival horror. Instead Silent Call is an updated version of the old aski games. You are a tiny character on screen who must traverse mazes, fighting enemies and collecting items. You kill enemies (bugs, dogs and bats mainly) by walking into them, and your hunger meter is constantly depleting so you must regularly eat food to stop yourself starving to death. There is no music, and looks very basic but I was sad when the trial for the demo was over, kinda fun.

First off; my house is infested with damn fruit flies. Anyway, Night is an artsy platformer in which you play as a man (who appears to have a sack over his head) running through cornfields and over bridges at night. There are snippets of story, it seems you are being pursued by monsters for some reason. There are platforms to jump over (aided by your ability to summon rocks out the ground), monsters to fight (you are able to summon a monster from your nightmares to defeat them) and lots of piano music. The whole thing has the feeling of a dream, the visuals look almost hand crafted, and the use of light and shadow is good. Intriguing. 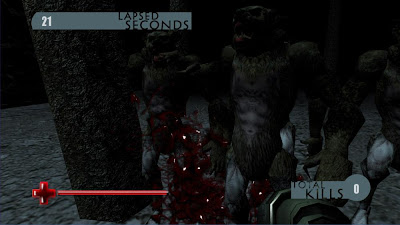 This is a first person arena survival game. It takes place in quite a large dark wood, for an indie game it doesn't look bad, at least far better than most FPS games on the channel. The problem is how boring it all is. You occasionally get attacked by werewolves but your machine gun easily dispatches them, it was a bit tense at times but for the most part I was stood in one spot checking Facebook.

And now for the last in my Indie Horror games round-up for today... 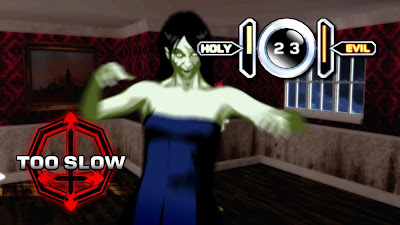 This starts with a warning screen saying it is not suitable for children (it is), then you get into the game. A floating possessed woman hovers around in front of you while button prompts flash on screen. Get them wrong or take too long and the woman floats closer. It looks nice with some comic book style visuals but there is just not enough to it, kinda boring. A nice touch is that when you die you get a message saying 'the power of Christ compels you to...' then gives you an option to quit or try again, made me smile.

So a lot of average games reviewed, but don't worry there is plenty more still waiting! Next time I may do an Indie Zombie Horror Videogame Review round-up. What an extravaganza that will be!
Posted by Daniel Simmonds at 08:52