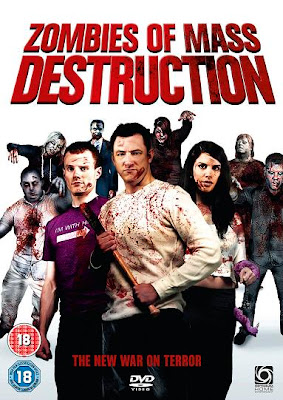 As the title suggests Zombies of Mass Destruction is a comedy horror. From the look of it I was expecting 'hilarity' on the level of Zombie Town, but it was better than that, I really wasn't in the right frame of mind to be watching a comedy though so I may be a bit biased against this.

Set in 2003 a zombie washes up on the shore of small island Town Port Gambol, before long the whole Town is being over run with flesh eating zombies. There are two main stories going on, in one Iranian/American Frida has returned after dropping out of College, while the other focuses on gay couple Tom (played by Doug Fahl) and Lance who have came to the very bigoted Town for Tom to 'come out' to his Mother. They both get caught up in the disaster that is supposedly a terrorist attack by a foreign enemy. 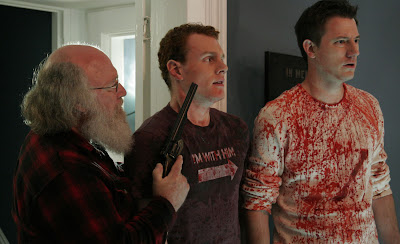 The film has more in common with Peter Jackson's Brain Dead than anything else, while a comedy the gore effects are very over the top, zombies and victims losing pints and pints of runny blood when attacked, soon everyone is coated in the stuff. Zombies literally seem to fall apart, heads and limbs being pulled off with ease. An early zombie even has her eye ball just fall right out her head for no reason. This would be fine if it was restricted to the creatures but humans also seem to suffer weak bodies, a man gets his arm ripped off (and then amusingly beaten with it) very easily by a zombie. It doesn't try to be real though, and least the effects are good, such as a cool scene when a zombie gets a pair of scissors stuck upwards though its face.

The dialogue is also quite funny in places, less than 5 minutes in I was surprised when I laughed out loud at a short conversation between a man and his son, I never expected to laugh and wasn't prepared to so came as a shock. People frequently treat Frida as a foreigner based on her looks, despite her constantly saying she was born and raised in America which was a reoccurring joke. Characters in general are ok, stereotypes but least they have personality. Personal favourite was the crazed preacher convinced the zombie apocalypse was the end of the world (tells his congregation something like 'Don't worry, we have the most famous zombie of all time on our side; our Lord Saviour Jesus Christ!'). Much like the game Dead Rising there are psychos mixed in with the survivors; conspiracy nut job Joe Miller convinced Frida is an Al Qaeda terrorist, and the Preacher with his fiercely loyal congregation. These mix up the story a bit. 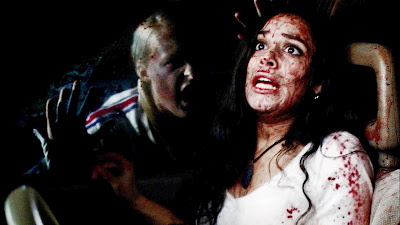 The film is let down by a lack of plot though.  The two different stories are kept totally separate until 5 minutes before the end of the film, and neither of the sets of characters seem to have any direction other than to run around killing zombies aimlessly for the films 90 minutes. Another irritating factor of the film is the high pitched screaming that all the female characters do, it seemed at times they were hired for their ear splitting screams. It does play with expectations at times though, early in the film Frida comes across a lost little girl who she promises she will protect and get her through the disaster, seconds later a car has hit the little girl leaving Frida holding a severed arm.

The film tries to be topical by having themes of racism, and homophobia but is not dealt with in a serious manner to have any impact, more done for comedy factor (After being attacked by his unknown to him zombie Mum after coming out as gay Tom's partner Lance says 'Wow, that's just how my Dad reacted'). The usual factor of characters just not behaving realistically to the deaths of their loved ones also rears its head. 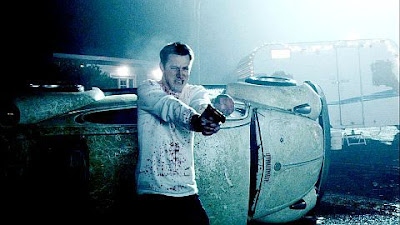 In better times I could have seen myself really enjoying this, as it is it was ok, just a bit lost in its dead plot.

Posted by Daniel Simmonds at 06:29

Thanks for your review. I play Tom Hunt in this movie. I'm glad you at least got a few laughs.

It was a fun film, keep up the good work!