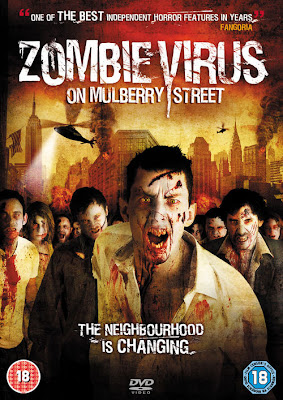 First off a few niggles. The title is terrible, in America it was just called 'Mulberry Street' which is better as for one thing the film doesn't have zombies in it, they are rat people. Secondly another terrible cover, is it law that all low budget zombie films have to have the exact same picture on them? (a horde of zombies in the foreground, with an apocalyptic City in the background). A friend kind of recommended it to me, saying it was terrible and so I would probably like it!

Zombie Virus on Mulberry Street takes place in New York over a 24 hour period. What starts off as random attacks by rats in the subways leads to an epidemic that sweeps Manhattan as the victims of the bites become hungry for human flesh, and also start to turn into rat people. The film centres around the inhabitants of an apartment block on Mulberry Street who must work together to hold out against the flesh hungry hordes assaulting their neighbourhood. 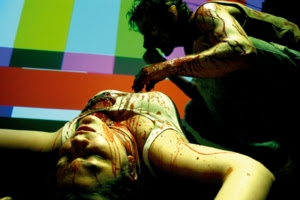 While a low budget film it does look quite good, much higher quality than I expected. The special effects are good even though the concept of rat people is frankly ridiculous. The whole film is played uber seriously, no attempt is made to lighten the mood. The characters are an unlikeable bunch, not bad people, just all moody, serious, and dull. The teenage boy character is really strange acting (and the actor looks like he is in his mid 20's), main character Clutch is dull as dishwater, while his love interest Kay is lifeless. A whole host of characters are introduced, and randomly picked off as the film progresses but the film fails to make you care about them at all.

There is good direction with a lot of scenes played out in slow mo, and silent save for a usually downbeat song playing over it.  These sequences are well done, and give atmosphere to the film. The plot is basic as Hell but works, it is good that there is no explanation for the outbreak. It does seem stupid that in less than 24 hours the whole of New York has been evacuated and left to rot (at least for a time), you would assume the Army would have been called in or something. This is brought up in the film though I think only to try and cover up the obvious plot hole. 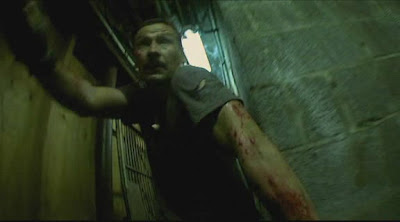 I have talked badly about the film but it was enjoyable. It looks quite grainy throughout, has a great soundtrack and is a bleak affair. There are some good scenes, such as a bouncer going crazy on the rat people with a frying pan, and a nice sub plot that involves Clutch's scarred soldier daughter returning from war and trying to make her way across the rat people infested New York to find him.

Not a bad film, just does not do anything particularly special, I could see myself watching this again at some point though.

Posted by Daniel Simmonds at 17:04