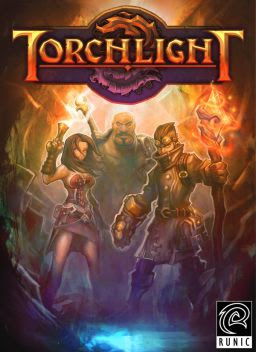 I really need to get back into doing my blog updates, has been hard as of late. Torchlight is a dungeon crawler much like Diablo.  Proving popular on the PC this budget title was ported to the 360.

Choosing from 1 of 3 characters: Alchemist, Destroyer, and Vanquisher (or as they actually are; Mage, Barbarian, and Ranger). You start in the Village of Torchlight. The nearby mines were a rich source of Ember (a valuable mineral) lately the Ember has become corrupted leading to an infestation of monsters into the mine making it inhabitable. You are tasked with going down to the very bottom of the complex (all 35 floors) to find out the cause for the corruption. 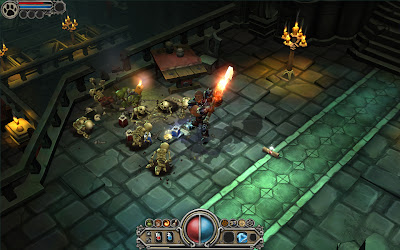 Starting off in the mines you then travel to dank caves, mystic ruins, a prison complex surrounded by lava and more. Around every 5 levels you get a new location, and this helps to relieve the tedium. Most areas end with a boss battle against some type of big meanie. This is quite a simple hack and slash, enemies swarm you and you fight them with a variety of weapons types. There are hundreds of different weapons in the game ranging from axes and swords to staffs, guns and bows. My character was a Destroyer and I concentrated on 2 handed fighting. Each of the 3 classes has a variety of moves and skills they can learn as they level up, even at the games end there were still a lot of abilities I had not yet unlocked.

Joining you, and the most novel thing is your pet. Your pet follows you around, attacking enemies, but can also be sent off on its own to head back to Town and sell any items you have given it.  With the amount of loot dropped in the game this is a handy time saving diverse which means you don't really need to warp back to Torchlight unless you have finished a quest. Unfortunately the quests are very basic and boring with about 3 different side quests repeated repeatedly. You must find a rare item, or kill a rare enemy, and that is it for side quests. The main plot is really just an excuse for you to fight and was not interesting in the slightest. 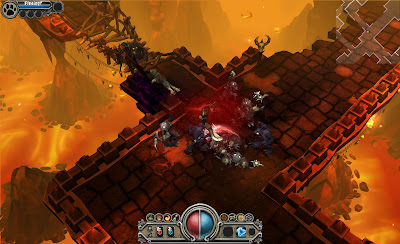 As you fight downwards you encounter a rich variety of monsters to face. You come across zombies, lizard men, skeletons, dragons, goblins, bats and many other fantasy tropes. My favourite enemies were the pygmy warriors with their spears, they would often turn tail and run which was amusing. On the other hand the Cat people sorceresses were very annoying with their high level magic. Even towards the end there are constantly new enemies types appearing ensuring things are spiced up a bit.

The game is not particularly hard, I usually died as a result of not keeping an eye on my health, and the punishment for dying is really quite minimal. Can be a bit frustrating in later levels when you are constantly swamped by lots of enemies which sometimes resulted in some slow down. 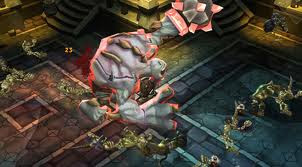 As the first dungeon crawler I have ever played I had quite a fun time, the soundtrack is mournful, but also dramatic and fits the game well even if slightly at odds with the cartoony graphics. I did find myself getting quite bored at times with the repetitive action meaning I could only play it in short chunks. After the game is completed you unlock an infinite levelled dungeon so there is a heck of a lot to do. Not a bad game, will look at Torchlight 2 with interest when it is released later this year.