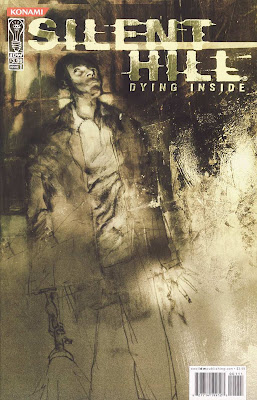 Many times I have said Silent Hill is one of my favourite game series, back in 2004 I was over joyed to hear there was a Silent Hill comic book coming out. What I read that fateful day made me go away and never again read it, now 8 years later I have returned to give it another try.

The premise sounds ace for a Silent Hill book. Psychologist Dr Troy Abernathy's latest patient is a woman suffering  apparent delusions about the Town of Silent Hill.  Before turning comatose she had raved about how the Town was evil and full of monsters and demons. Unable to cure the girl Troy decides the way to get through to her is to take her back to Silent Hill so that she can see for herself her beliefs are unfounded. This being Silent Hill is a bad mistake as Dr Troy's darkest secrets soon come to haunt him. Later on in a different story goth girl Lauren and her boyfriends gang head to the Town. Rather than stumble into the horror Lauren seems to know exactly what the Town is capable of and has come prepared. 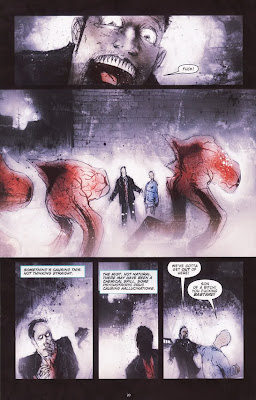 Different to the games the evil in this tale is mostly down to a creepy little girl called Christabella who seems able to control the monsters, feeding off the bloodshed they cause. Originally released as 5 comics Dying Inside brings them all under one book.  The first 2 issues concerning the Dr is separate to the 3 issues that follow, even the art style is different and that's half the problem.  The art is dark, and screwed up but this gets in the way of the story being told. Due to the murkiness it is often hard to tell which character is which as they all look the same in the dark. It is often really hard to tell what is going on in the many action sequences and I found myself having to rely on the dialogue to work out what was happening. On the flip side the art is very horror inspired fitting the mature tone of the tale.  The first 2 issues fare better with a simpler, more defined style, and also a lot more colour.

In keeping with the mythos of the games the Town does seem to prey on the fears and secrets of the people who visit, certainly true for the Dr's tale while the monsters are personalised to Lauren when her and her friends arrive.  A lot of the creatures are ones from the games, in particular Silent Hill 3, though the flying bats of Silent Hill also appear. A lot of the creatures here have writhing tentacles.  Being a stand alone story there are no references to the actual characters of the games, this is fine by me as the Resident Evil: Code Veronica manga's proved that comics based on purely on the stories of games are quite bad. 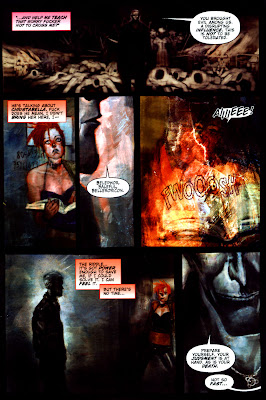 This is a good comic with a decent, and mature plot but is let down by muddy artwork that detracts in places more than it adds, if you are a fan of the Silent Hill universe though it is recommended as it runs with the downbeat tones of those games.