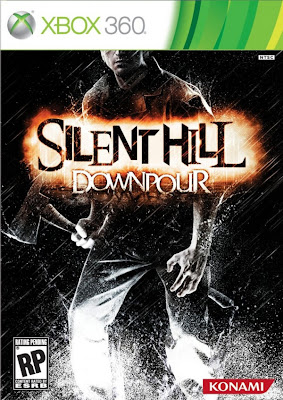 Silent Hill is one of my favourite series of games (up there with Castlevania) but after the disappointment of Silent Hill: Homecoming I did not know what to expect with this one.  I played through the game three times in a row, and enjoyed each playthrough.

Silent Hill: Downpour follows the exploits of Murphy Pendleton a convicted criminal.  While on a bus being transferred to a maximum security prison an accident occurs, the bus crashes and Pendleton escapes. Unfortunately he decides to head towards the nearby Town of Silent Hill not knowing that it is a place of nightmares and terror. There as is the way with the cursed Town all his dark secrets, memories, and crimes manifest themselves physically to make him confront his real self. Chasing him is the transfer officer; Anne Cunningham who has a personal vendetta against Murphy for an unknown reason.  Looking for an escape from Silent Hill is Murphy's only goal, but one that could be very hard in a place that does not want him to leave... 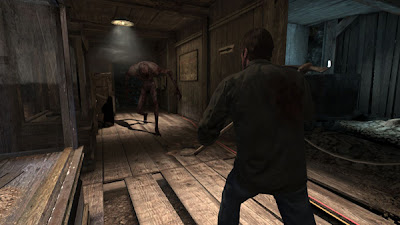 First off when I heard that long term Silent Hill composer Akira Yamaoka would not be doing the soundtrack I was worried, his music is part of what makes Silent Hill such a special feeling and unique game with his, luckily Daniel Licht the new composer does an utterly fantastic job of following in Yamaoka's footsteps. Sound is integral to the series, and is no different here. Radio's are dotted around the world that play songs specific to Pendleton, many of them being dedicated to him from an unknown D.J.  The song 'Born Free' in particular turns up a lot and become a song I just could not stop huming all the way through.

After Homecomings increased action it is nice to see that it has been toned down quite considerably for this instalment.  There is an increased focus on melee weapons (that can break after extended use) with only two fire arms appearing, and having very limited ammo for them.  The combat is very basic and not too great, you have a block button, but the dodge has been removed. Combat is not the point of the thing though, there is even an achievement for completing the game without killing anything. Puzzles are more in abundance but for the most part of boring safe cracking ones and virtually no riddle based ones like the series was known for in the past. 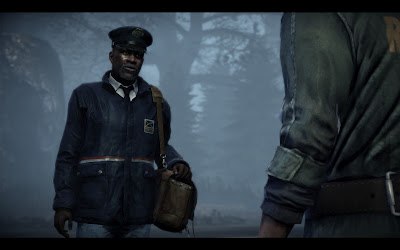 So the game looks and sounds fantastic, but what about the plot?  Much less convoluted than previous games the story is stripped back to basics and works well for it.  Murphy is a likable character who has legitimate reasons for the evils he has done in the past, he feels like a man being punished unfairly rather than a deserving victim for the Town.  There are quite a few other characters who show up at various times but they are not key to the plot really.  The Town this time looks like one that is sinking into the ground, giant craters and barriers split up the linear (but open world) setting of the Town.  There are 13 optional side quests in the game that involve you doing a variety of tasks such as laying a vengeful ghost to rest, or locating a missing autistic girl, all have the Silent Hill style twist to the quests and are kind of fun to do once but probably would not do them again. Locations are interesting, an early highlight is a trek through some mines, while a later level set in a Monastery ripped in half by an earthquake is very memorable

I would love to stop there and say the game is amazing but unfortunately there are a few things which drag it down.  Firstly the enemy design is lazy and uninspired.  The female enemies (known as Screamers) look just like the ones from Deadly Premonition (a game you really do not want to take inspiration from), while the male enemies all look like the guys with metal in their faces from the Condemned games.  The frame rate is shockingly bad, especially out in the streets with screen tearing, freezing, and drastic frame rate affecting gameplay. A gameplay mechanic that when it starts to rain enemies get more plentiful and stronger results in Downpour becoming almost unplayable due to the terrible frame drop. 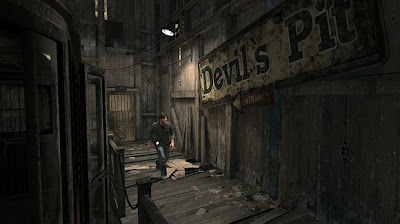 The side quests while fun have zero point to them, the rewards you get for doing them are all pointless (such as ammo and health packs), a better prize for doing them would have been preferable.  One quest gives you access to the subways under the Town that is supposedly a way to warp around locations but a well documented glitch meant that even with these unlocked they were still unusable so kinda pointless.

On a better note though the Silent Hill 'Otherworld' appears with a vengeance leading to some truly messed up situations with corridors that keep on extending, gravity reversing and a host of cool effects. Each Otherworld section mostly involves you being chased by a deadly red light down narrow corridor's that twist and change in a thrilling and exciting way. The influence from Shattered Memories can be really seen here, you are even able to look over your shoulder just like Harry in that game. 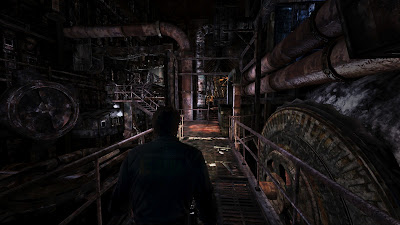 With a lot of fan service (references are made to all 6 of the previous Silent Hill games), a great story, and a true survival horror feeling (this game is definitely unsettling, creepy and scary in places) Downpour does so much right, it is just a shame that some bad programming get in the way of what would otherwise be an essential game.

Posted by Daniel Simmonds at 15:41