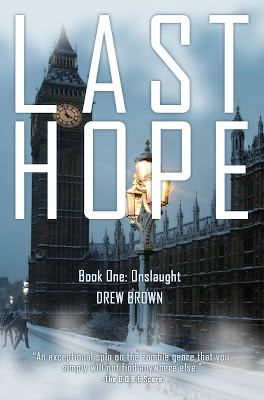 Zombie books can be really good, really exciting thrill rides, or they can be tense slow paced affairs. Last Hope manages to be both, and succeeds at both.

Last Hope follows mid 40's Budd Ashby; an American pilot who is spending a night in a posh London Hotel after flying over a top Scientist for the company he works for. To make things better Budd ends up hooking up with a young French pop star; Juliette. It turns out things could not get better for him.  Waking up the next morning he sees that London has gone silent. Nearly everyone in the Hotel is lying dead on the ground. Budd and Juliette meet up with some fellow survivors just in time for a very thick fog to settle over London, and pretty soon all the prone bodies start to at first twitch and then to return to life, predictably as flesh hungry zombies, but this is just the start of the troubles...

This is one great zombie book, I don't think since Autumn (by David Moody) have I enjoyed one as much. Budd is a fantastic character as he is so flawed, but in a human way. Frequent internal thoughts are provided for him, showing his thought process which are quite funny. His motivations that he explains to other survivors are usually vastly different to what he is really thinking (such as when he says he is going to go look for a first aid kit when in reality he just wants to get away from fighting zombies) and he is not afraid to turn tail and run, even abandoning others which is a fresh breath of air into stories where the main character is usually some 2 dimensional hero type wanting to help everyone.

At over two thirds of the way through I realised that not much at all had happened, all the characters where still hanging around the giant Hotel but this was an awesome realisation as it had all gone so quickly that it didn't matter at all at how slow paced it had been, each short chapter led onto the next one beautifully making it a book you just couldn't put down.  The full title of Last Hope is actually 'Last Hope Book One: Onslaught' Naming a book 'Book One' I at first thought as arrogant, as if your book would be so good that a sequel was already assured but this is one book that needs a sequel essentially.  It is such a roller coaster ride and ends on such a cliff hanger that it would be criminal if there was not a further book, or five, ten, twenty. This was like crack, I could read infinite numbers of sequels and never be bored by it.

Needless to say it was not long after realising how much of the book had passed before things spiralled into craziness with a genre shift (still zombies, but a different style). Brown has the enviable gift of creating locations and situations that you cant but help see in your mind as you read, I felt like I was there with the characters. To be fair some of the side characters were not fantastic; some I got confused with who they were, while others such as Sam (supposedly the 4th best poker player in the world) were just no interest to me. The key characters of Budd and Juliette were fantastic.  Budd's desire to protect his new love interest gives his character real motivation, at times she does seem no more than a prop for him to focus on but attraction is such a powerful emotion.

There are a lot of unanswered questions in the book; nothing is explained which works really well in the context, there is also the often commented half joking theory that it is all a dream, this is one situation where if it did all turn out to be a dream would be the perfect ending, as such sub plots hinting at time travel, and Budd having a mysterious uniqueness to him that people are willing to die to protect him give plenty of places for the next (already announced) book to go (Last Hope Book Two: Revelations).

At just one year older than me Drew Brown is a great author, I look forward to his next work. Typical zombie horror, but very well done, and don't be put off by the terrible cover.

Posted by Daniel Simmonds at 12:31