Inside the Whore - Horror Film News 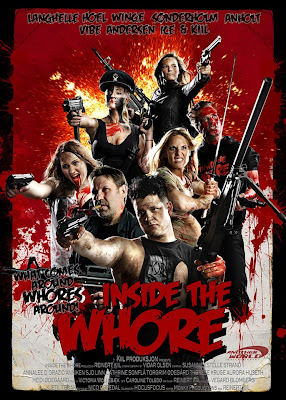 Back at the start of June the poster for horror film 'Inside the Whore' was revealed (pictured above). The film is a sequel to 2010's 'The Whore' and stars, and is directed by Norwegian director Reinert Kiil. It stars a host of horror actors such as Jorgen Langhelle (from The Thing remake), Vegar Hoel (from Dead Snow), and Viktoria Winge (from Cold Prey 1 and 2). Also starring is a reality 'star' Anette Young of Norwegian Big Brother fame so should be some quality acting.

Though a sequel the film seems quite interesting in that in the film the sequel to the first film is being created. This film focuses on the film crew making the sequel who start to notice bad things going on when people start dying on and around the set in various brutal ways, so Scream 3 set in Norway then? Hopefully this would be better than that too polished work.

I have not heard of this film or the The Whore but an interesting sounding premise means I may well give this a look. Inside the Whore is released in Autumn later this year.
Posted by Daniel Simmonds at 11:06