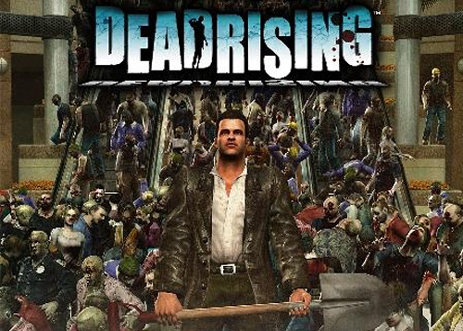 Looking through the long and tedious index on my site I realised I have not reviewed Dead Rising. Dead Rising: Chop till you Drop the Wii lite version I have reviewed but not the main course.  I famously turned down a date (kind of) to get home to wait for this game to drop through my letterbox.

Dead Rising sees you as Frank West (a photographer who has covered wars) who ignores a military blockade on the small town of Willamette in order to try and get a scoop on what is going on. He discovers a town over run with the living dead. With three days before his helicopter pilot comes back for him he explores a giant shopping centre to uncover the reason for the outbreak. A reason that involves South American terrorists, shady government scientists and the army itself. 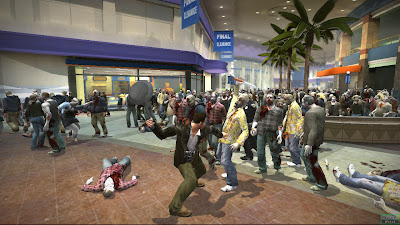 There are a lot of faults with this game, least of all is the fact that save points are few and far between. You can only save in either a bathroom, or on the bench in the survivors save room. Constantly ticking is the clock, if you don't get to locations on time then the games story is effectively over. You can still go rescue survivors, or you can restart the game with all your experience intact. Multiple restarts are really what is needed so that you are strong enough to do your job.

The main quest sees you uncovering the conspiracy but the side missions involve you rescuing innocent civilians trapped in the shopping mall. Usually you must solve some simple puzzles to get the survivors to follow you back to the safe house such as locating alcohol for a drunk, or finding food for a hungry person. It can be quite stressful getting the survivors back to the safe house though as they like to be slow and get picked apart by the many zombies. Least these missions are optional. 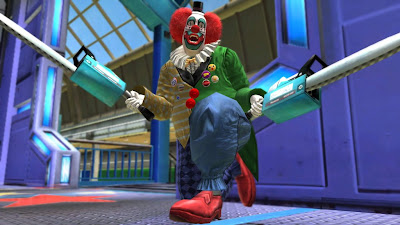 There are thousands of zombies in this game, literally. This only ramps up towards the spectacular ending that leads to a very memorable boss fight set piece (to give more away would ruin it). You have access to a lot of items that can be used to defeat the zombies. Some are useless (such as a giant teddy bear, water pistol, and potted plant) while others such as the bowling ball, shears, and pistols are quite useful. Other objects such as traffic cones, gum balls, and tins of paint can be used to distract the zombies.  Crazed humans (known as psychos) appear as boss fights and can be quite challenging. These include an insane clown armed with chainsaws, a Vietnam vet, and a totally crazy super market manager who chases you down with a dangerously modified shopping trolley. The psychos are hard, but the cut scenes they feature in are very well done and entertaining.

The game has it's tongue firmly in its cheek and succeeds in being a very weird place which does not take itself too seriously. As well as the psycho bosses and zombies you also encounter cultists, and armed humans (who are no fun to battle). You are able to visit every shop in the giant shopping centre and do random things such as dress up Frank West in various humorous clothes (baby outfits, woman's clothes, and idiotic sports outfits for instance). The story is typical zombie fare but well done and surprisingly serious considering the rest of the game. You never feel over powered, the sheer amount of zombies just does not allow that. 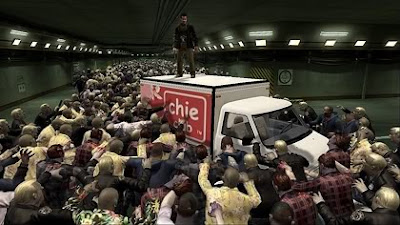 While a mode where there wasn't a constant time limit would have been nice the game succeeds as an oddball zombie title that delights more than it frustrates. If you love Dawn of the Dead, if you like zombies then this game is for you!