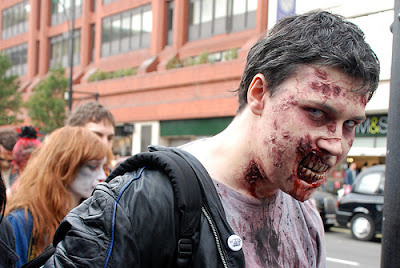 Well it has been a while since I have had a zombie dream, they have been missed.  I am reading Drew Brown's zombie book 'Last Hope' at the moment, I am sure that is what influenced my dream!

I was in some back streets in a strange town during the daytime, I was searching around in garages for something or other.  There were plenty of zombies dotted around but they were of the slow, dumb kind so I was able to easily run past them.  One zombie (who to me seemed to be the head zombie) was using a zimmer frame on wheels to get around and was a lot quicker than the others, still I was able to run past him.  There were plenty of zombies, including little toddler ones.  I was running the whole time but I never got tired, rounding a corner a zombie grabbed my sleeve but I managed to push him off.

I got to a strange market place where humans were selling goods.  All the humans were wearing long yellow robes which I assumed was so that they could be recognised as humans. A woman gave me some giant smarties but then she got dragged away by guards and accused of stealing...then I woke up.

Quite a cool dream, and despite all the zombies was violence free.
Posted by Daniel Simmonds at 02:12