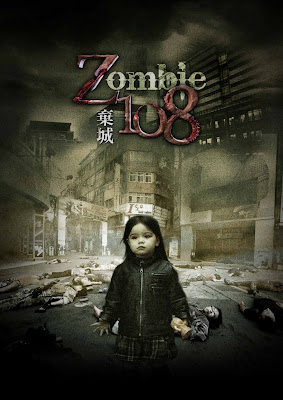 Zombie 108 is the first ever Taiwanese zombie film to be released, it was helped funded by over 900 fans and directed by Joe Chien. I did not know what to expect but was impressed by the trailer which showed that there was actually a budget for the film rather than the sloppy mess I expected with a fan funded film.

In District 108 of Taipai in Taiwan there has been a zombie outbreak after an accident at a research lab caused a virus to be released into the local water supply.  District 108 just so happens to be one of the roughest districts in the City; a place the Police usually avoid due to it being run by a crime lord. They are called in regardless as they have been tasked with evacuating the uninfected from the cordoned off area.  Soon they are set upon by a local gang who assumed the Police where there for them, but in the middle of the firefight the zombies attack both sides.  Teaming up an uneasy alliance is formed while they seek a way to escape the madness of District 108. 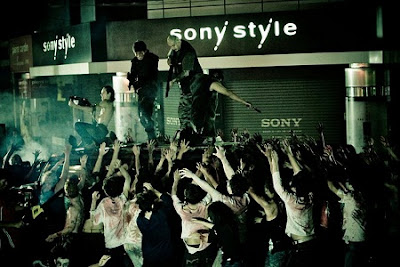 Zombie 108 does not really know what it wants to be, whether it wants to be a light hearted, albeit action packed movie, or if it wants to be an uncomfortable Hostel style one.  The main story of the Police and local gang battling zombies is quite entertaining, and genuinely funny in places. There is room for lots of comedy between the serious, pragmatic SWAT team and the more down to earth gang led by a huge boss.  Initially before the outbreak he is shown as a disgusting slob running an 'alternative' night club, surrounded by scantily clad females (of which there are a truck load of in this film) but his character develops as he has the most humanity of the group displaying a wide range of emotions (such as when he has to kill someone he loves). The Police on the other hand are all straight faced and don't really have much character to them. All quite amusing (plus one of the group turns into a Boomer straight out of Left 4 Dead!).

The sub plot of the film is far darker though, and quite uncomfortable viewing. A perverted serial killer who wears a mask made out of human skin (much like Leatherface) has captured a load of females who he keeps chained up in his apartment and brutally rapes at will. These were not fun scenes to watch as there is nothing light about them and seemed at odds with the more offbeat tone of the rest of the film. 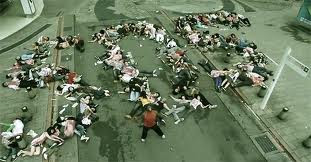 For the most part the film is in Taiwanese with English subtitles, but these are sometimes quite badly translated, one line which stuck in my head was when one of the serial killers captives insulted him with the damning line "You are a man who is just as ugly on the inside as on the outside!" (something like that anyway). The plot is quite confusing due to the bad translations and got characters seem to float about random locations quite a bit.

The zombies look ace in the film though, and there are hundreds upon hundreds of them. What is also cool is that Zombie 108 is not afraid to kill off its main characters, comedy characters, headstrong young women, the brave leaders of the SWAT team; all are killed quickly after being set up as if they are going to be key characters. One awesome scene that is shown through quick cuts is the last stand between a section of the SWAT team, and a gang as they are swarmed by hundreds of zombies, the Police standing on top of their van firing wildly, a large gang member standing outside a large KFC firing a giant mini gun and laughing insanely. You have to respect the lack of care for product placement in Asian films (nothing as funny here as in Hong Kong's Bio-Zombie where the outbreak started with an infected bottle of Lucozade! 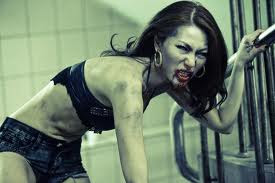 At nearly two hours this is quite a long film that could have done with some editing, the main zombie part of the story is silly and fun enough but the weird disconnect between serious horror, and action horror that occurs in the film means that while a good zombie flick it is not a classic, but then so few zombie films are to be honest (well it's true!). On a side note the child actors in the film are really good, though I am not sure if that is due to them not realising they where in a film.

Zombie 108 is due to be released on DVD on the 30th July in the UK courtesy of Showbox Home Entertainment.

Sounds interesting and I've been wanting to check it out for myself for quite some time now. Thanks for the write-up! Hopefully I'll dig the strange combination.