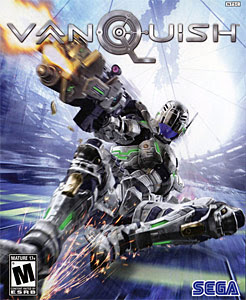 Vanquish is a third person action shooter from the makers of Bayonetta. The game combines the action of Gears of War with added mobility.

Vanquish is set in the future where over population on Earth has become a huge issue. It starts with an attack on San Francisco from a space station death ray that results in the City being destroyed. The Space Station has been seized by a rogue group of Russians who have declared war on America, if there demands are not met they are going to destroy a key American City every 24 hours. A fleet is dispatched to take back control of the Station and stop the Russian threat. You play as Sam Gideon; a member of Darpa that is accompanying the American Space Army. Armed with an experimental suit you have amazing defencive abilities such as the ability to boost out of danger, and also a special tool that can morph itself into any weapon type. 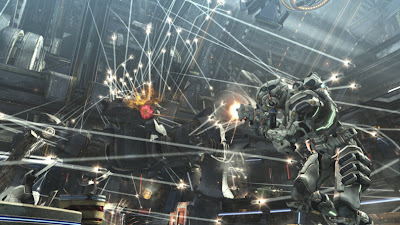 The enemies you fight in the game are for the most part not human, instead you battle an Army of robots, this is never really explained. If the Russians have an Army of robots then why does America send in humans who spend the majority of the game being blown to smithereens? There are a wide variety of enemies to face. The grunts are very weak but plentiful, elsewhere you get spider bots, giant humanoid robots and the gigantic bosses. The bosses are not that varied but show up enough times to be fun to fight. They range from tank like vehicles to absolutely gigantic robots who launch thousands of missiles at you.

To fight these you have access to a variety of weapons; the usual stuff for the most part. Each weapon can be levelled up over the course of the game in a clever way. If you have full ammo for a weapon but still pick up ammo for it you instead get the weapon levelled up. So it gives you the option to save ammo in case it is needed, or sacrifice the ammo to make the weapon slightly better. My favourite weapon was the rocket launcher as it had an ace lock on ability, the heavy machine gun was also a mainstay. You have access to a boost that lets you zoom around the levels for a limited time, also you are able to slow down time for a limited time. 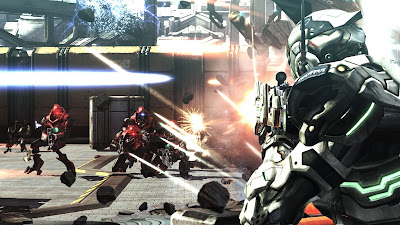 The games plot is basic but still handled confusingly, not surprising for a Japanese made game, there are lots of cut scenes, multiple ones per level. The game is split into 5 acts, each made up of 5 or 6 different levels. At the end of each level you are given score based on a variety of factors. Levels are quite varied but still end up feeling quite similar though they do look awesome. As well as generic sci-fi locations you fight though a shopping centre, a park, lots of monorail scenes, and factories. The best levels are one which sees you assault a large steep concrete hill for the duration with robots chucking huge chunks of masonry and vehicles at you. Another cool level saw you fight your way to a giant war ship, ending with you battling though it, slowly ascending the outside of it and picking off its guns.

Vanquish is a nice looking game, with a load of set pieces and cool cinematics though has some generic characters. The Commander of the Army (name) is generic as they come, all gruff and manly as he shouts and shoots with his arm mounted gun. The game is short enough that it never outstays its welcome, it is a perfect length as the stirrings of fatigue were just starting to set in when it ended. When ever it seemed there would be a on rails section it was snatched away to propel you back into the action which is not that bad a thing. Some QTE’s appear but are not numerous so don’t ruin the game. 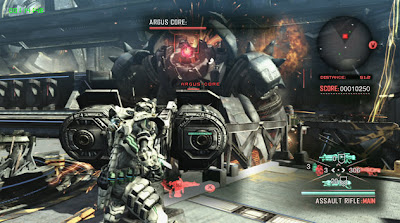 I enjoyed Vanquish, it is simple, arcady shooty fun, and has some good looking set pieces to it.

Posted by Daniel Simmonds at 12:28