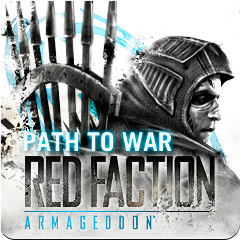 So I raved about Red Faction Armageddon yesterday, but how is the downloadable content? I myself picked it up when it was very cheap in a sale.  The content gives you access to 4 new single player levels and  two new weapons.

The new levels you get access to are kinda random.  The first levels are set before the terra forming facility is destroyed. Level one has you playing as bad guy Hales lieutenant; Malleus as you pilot a ship through the Marauders base to destroy their early warning system.  The next level sees you playing as a Red Faction soldier in a tank assaulting a facility which has come under Cultist control.  Next you are Darius assaulting the facility on foot, taking out guard towers.  Lastly you are again Darius but the level takes place 5 days after the insectoid aliens have been freed.  You are fighting though a Cultist base on the way back to your home town of Bastion, Malleus lets in loads of aliens as he believes the Cultists wont be attacked by them, he is wrong and it turns into a 3 way battle. 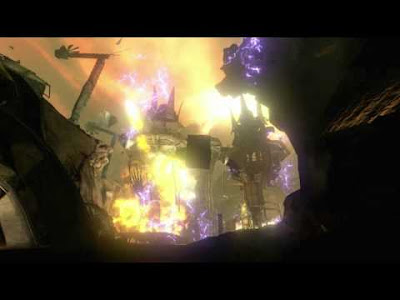 The new weapons are a rifle that shoots out a bolt that can pin enemies to walls, as well as a gun which gathers up any scrap into a giant ball that you can fling at enemies.  The DLC was fun enough but very short, lasting around 30 minutes.  With the context removed it is not so good as the main game, seems a bit directionless, and the vehicle levels are very easy.

If you loved the main game then I would say pick this up, but just don't expect anything that will stick in your memory, and definitely only get it if it is on sale.

Posted by Daniel Simmonds at 08:15