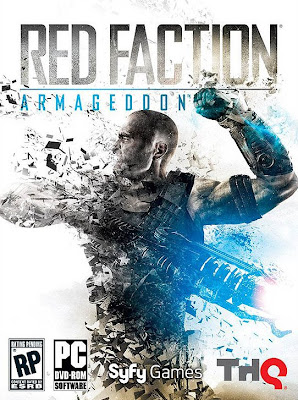 I have just played through the entire game Red Faction: Armageddon in one 6 hour sitting. I am either amazing, or need to get a life, either way it is done. Red Faction was known for it's geo modding tool that let you destroy the scenery, the first two games were first person shooters, while Red Faction: Guerrilla was an open world game set on the Martian surface.  For some bizarre reason the game has now gone third person abandoning it's praised open world style.

Set a generation after the events of Guerrilla you play as the star of that games son: Darius Mason.  An early mission sees you as a soldier assaulting a terraforming facility to stop a cult led by crazed preacher Adam Hale from destroying it.  Things don't exactly go to plan and you accidentally allow the facility to be destroyed.  With it gone the Martian world becomes inhospitable with wild sand storms and hurricanes wracking the surface (turns out it was the only thing on the whole planet keeping things livable). 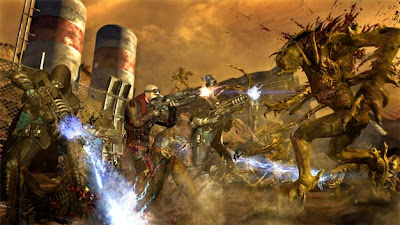 A few years later and everyone is living in caves and old mining facilities under the ground.  Despite kinda causing the destruction of Mars no one blames your character too much.  Hired by some people to explore some ancient ruins leads you to again accidentally doom the populace when you break an ancient seal which releases literally billions of insectoid aliens from deep within the planet. Being the kinda guy you are you decide not to own up, yeah your character is kinda an idiot. Anyway soon you have the whole (surviving) population baying for your blood and chasing you down Benny Hill style. Heading to the surface you pledge to stop the alien threat.

I had a lot of fun with game, much more than I expected to. It looks ok, not amazing but it is just a lot of fun to play.  Weapons seem to have some weight to them, hitting enemies is satisfying with all the right noises made.  The weapons you get are quite varied though I just stuck with the 4 I liked most; rifle, machine gun, powerful duel pistols, and a plasma beam.  Other more varied weapons include a black hole generator, a magnetic gun that can pull rubble down on enemies, and a mine launcher that only effects organics.  A lot of the weapons are able to destroy scenery such as the many walkways that you go along. 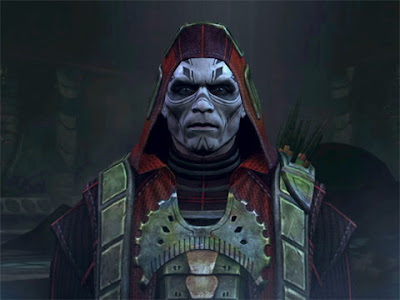 Locations are varied, as is what you do in the game.  Initially (after the prequel mission) there are a host of levels set underground in the caves below Mars, all kinda samey but made more believable with the inclusion of lots of signs and dwellings.  Later missions on the surface of Mars make a welcome break as do the vehicles missions.  A couple see you piloting a crab like tank, while others see you flying a plane, sailing down a sea of magma on a boat, and smashing your way through a small town in a mech suit.

Enemies for the most part are the insectoid aliens (are they really aliens if they come from Mars? surely the humans are the aliens? The game doesn't seem to think so).  There are a variety of them, the smaller ones jump from wall to wall, sticking to them while firing 'biological weapons' at you while the larger ones are built like brick house and are quite powerful. Pods appear every now and again which unlimited aliens spawn from and so must be destroyed, as must giant maws which pop out the ground and make all enemies in the vicinity twice as tough.  Cultists also turn up as bad guys and are easy enough to fight but include a very fun running boss battle against a giant enemy crab (you don't hit its weak point for massive damage). 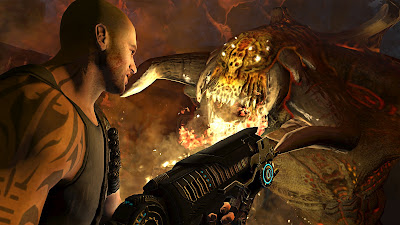 Collecting salvage lets you unlock new abilities such as less recoil, and extra health, all needed though the game is not too tough.  The later levels drown you in hundreds of bad guys, for the last few I literally charged head long, rolling out the way of shots, constantly pressing select to bring up the compass showing me where to go.  I am not sure if that is how it was meant to be played but to take out all the enemies would have taken me days and it was getting late!

The plot is stupid, but the dialogue between characters is very funny, and well written.  In particular the relationship between Darius and his A.I; S.A.M is hilarious with S.A.M constantly correcting Darius and moaning about the things he is doing.  It was cool to see that the level set in a sewer had Darius vocally complaining in a high pitched voice for the entire time he was there, too often in sewer levels in videogames characters don't seem to mind being there, so it is nice to see that addressed here. Also later in the game (spoiler!) it takes you minutes to restore the terra forming facility, why on earth had no one thought to do that when it was destroyed all those years back, rather than hiding underground; even with a billion aliens clawing at you it is a cake walk, and there were not even any aliens back when it was first put off line! 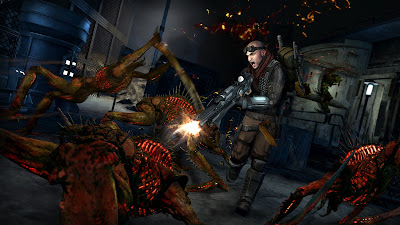 All in all I had lots of entertainment with this game, no where near as bad as people have made out and has good looking CGI cutscenes and a witty script, recommended for some stupid but enjoyable shooting.

Posted by Daniel Simmonds at 17:14