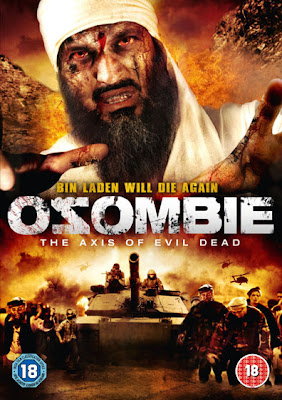 When I first heard there was a Bin Laden zombie film I was gob smacked, really did not expect that! Of course I had to buy it, and having watched it I can say that it actually isn’t that bad despite what you would expect.

The film starts during the raid on Bin Laden's complex in Pakistan, the Special forces team discover a zombie farm there, and after a brief chase they kill Osama, but not before he has injected himself with a zombie virus. As the helicopter heads out to sea he reanimates and causes the vehicle to crash with Laden washing up on the beach. Some months later and Afghanistan is in the midst of a secret zombie outbreak, a small American Army team are in the area to find a way to stop the outbreak, the main force having withdrawn for fear of infection. Also there is a young woman; Dusty who has travelled there to look for her conspiracy nut brother Derek. Derek is convinced Bin Laden is alive and so has gone to the country to kill him once and for all. Teaming up with the soldiers they look for the secret Taliban compound where it seems the zombie plague is coming from. 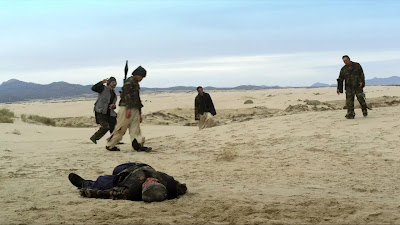 What surprised me about this film is how seriously it treats the subject matter. I fully expected this to be a schlocky, low budget comedy fest but it is the opposite, that doesn’t mean the plot is sensible, just that it is treated like a drama. The film has a feel of quality about it, and really tries to flesh out its characters to seem like real people. Derek for instance is definitely the films comedy character, but he has reason for wanting Laden dead after his team of Firemen where killed at ground zero. Yeah it is ridiculous, such as a nightmare he has in which a zombified Bin Laden chases down him and his sister (in the dream as children) at a playground. The film goes to lengths to portray the civilians of Afghanistan as normal people, not monsters. One scene centres around a lost boy finding his family, while the characters remark about how it is only insurgent zombies they are killing.

The effects are mostly computer generated and so don’t look amazing, lots of blood that vanishes mid spurt for instance. The zombie make up is good enough, and there are plenty of explosions, and fire fights. Acting is patchy, one soldier (who thankfully is killed early on) could not act to save his life. The soldiers are all stereotypes but still manage to come across as likable, and not the total usual meat heads. Is funny that the muscly actor who plays one of the soldiers manages to find a way to have his top off in nearly every scene. As the characters are killed off one by one each death is in its own way affecting, surprised me to care about them. 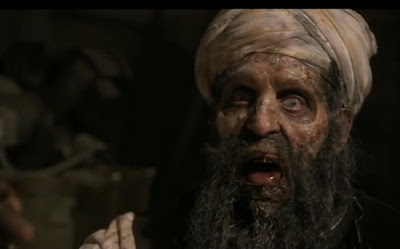 Ozombie seems strange in that they are trying to approach the subject of Osama Bin Laden and his atrocities with tact rather than milk the shock factor of making a film about a zombie real life bad guy. His character really doesn’t feature into the film much, he is more like the Bogey man providing motivation for Derek. The backdrops reminded me of The Dead, but this is far more of an action film than that with characters frequently making jokes and acting like they are in an action film rather than reality. Still, not bad, an interesting concept.