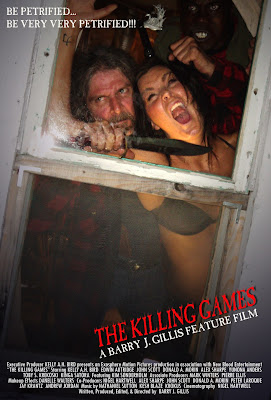 Nowadays it is taken for granted that horror films wont get banned, it is not like the 1980's where classics such as The Evil Dead were being banned left right and centre. However in the Canadian Town of Edmonton horror has been banned, a director denied the right to get his film seen.

Canadian horror film; The Killing Games (directed by Barry J.Gillis) was banned from the Edmonton International Film Festival earlier this year on grounds that it was too violent to be shown. This has been seen as controversial as not only is Edmonton Gillis's home town but the way he was told this news breached the festivals rules as it is supposedly against the rules to let filmmakers know any information before the official announcement date of August 7th.  The festivals Chairman Michael Hamm said via a telephone call with Gillis that "The Killing Games was too violent for the Edmonton Film Festival".

The Killing Games is about a father who decides to take the law into his own hands after his daughter witnesses a double murder, narrowly avoiding the clutches of two serial killers.  Having seen some of the film I can say that the acting is truly terrible, very bad indeed, for all I know it could be a awful film but that doesn't mean it shouldn't get the chance to be seen. Director Gillis said of the ban "It was alright for them to see the entire movie, but they don't want you to watch the movie, I feel like David Cronenburg when he first started out in Toronto, it was the same kind of thing, a never ending struggle because of a little violence in a Canadian movie".

For more information on The Killing Games check out the website here.
Posted by Daniel Simmonds at 08:41