There are a lot of horror based videogames on the X-Box Indie channel, too many by far to review, especially the more bad ones that I don't even last the demo before quitting.  Here are some of the Horror games on offer that will not be getting their own reviews... 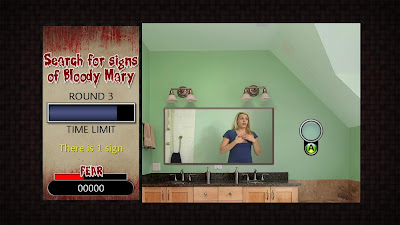 A Silver Dollar game (notoriously bad game makers) in which you must discover the Bloody Mary evidence on a mirror in which a bad actress faces.  You do this by randomly clicking in the hope a hidden blood stain will appear. Terrible. 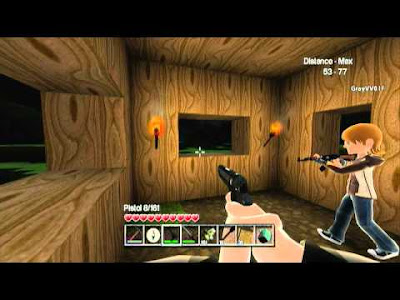 A Minecraft clone that has now been made redundant due to the appearance of Minecraft on the X-Box 360.  The Z in the title refers to zombies who appear frequently, as well as skeletons.  More action than Minecraft (you even start with a pistol) but frequent freezing render this game a chore to play even if it doesn't look too bad. 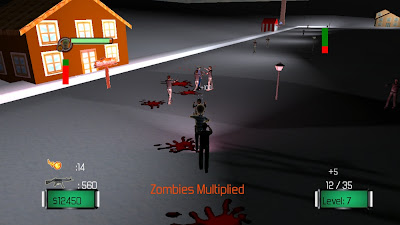 You control your avatar in this third person arena shooter. The (bland featureless) City of Serene has come under attack by zombies. Each level sees you shooting at odd acting zombies who home in on you and the survivor in each level. If you or the civilian die it's game over. Many of the zombies hide inside snowmen. Looks terrible, sounds terrible, been done to un-death a million times before. 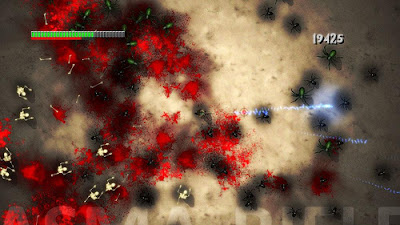 Another over head twin stick shooter.  It looks good, and has an arcady vibe to it, but an awful slow rock soundtrack. You shoot bloody skeletons and zombies with a variety of weapons such as plasma rifles, missile launchers and rifles.  The game has some comedy in it's perk descriptions but even that can't save it from the fact that there are just too many games of this type cluttering up the Indie channel. 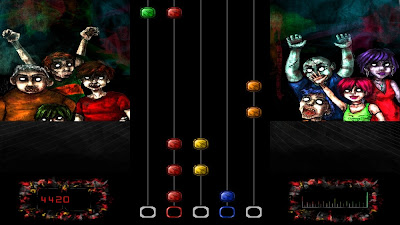 A music game, I was kinda pleased to discover that.  It has a handful of original rock tunes and plays ok. It is annoying that if you miss a note the whole song goes silent for a second or two, kinda off putting.  The background has a picture of zombies rocking out. Dusted off my guitar for this one!

So there you have it, a bunch more horror Indie games discussed, the games really are as bad as I make them sound.
Posted by Daniel Simmonds at 14:35