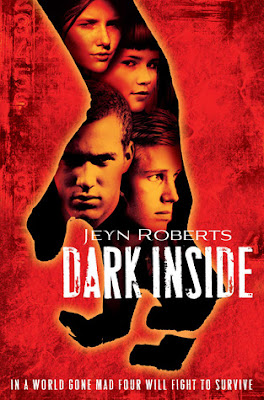 Dark Inside is the debut novel of Jeyn Roberts written for young adults. Despite being aimed at younger people it is still a book that deserves to be read by all.

A series of catastrophic earthquakes occur world wide devastating much of the Earth. With the earthquakes millions die, yet millions more become changed, now possessed by a great evil they exist only to cause chaos and butcher any survivors unaffected by the madness covering the globe.  Dark Inside follows four separate teens as they try to survive in the ruins of America.  Michael who teams up with a fellow group of survivors, Clementine who survives the massacre of her entire town, Mason who battles the evil threatening to over take him, and Aries who is set on her way by a mysterious young man who seems to know too much about the events that have happened.

Each chapter written in first person focuses on one of the four teens, with a fifth mysterious perspective from someone called 'Nothing'.  Each of the four (well five) has their own story going on in the world, so it is like reading totally different stories. This was a really well done method of telling the story, chapters that ended on cliff hangers were made all the more suspenseful due to it being several chapters before the hangers got resolved. The stories all feel like road trips, each of the four heading through destroyed towns, fighting and evading the 'Baggers' (what the crazed monstrous humans are called in the fiction) and just trying to find food and shelter to survive.

For a book aimed at young adults this is plenty grim with lots of violence.  The Baggers are insane to various degrees, some are totally crazy (one character says how he saw a Bagger snap his own neck after getting his head stuck between two posts) while others have degrees of intelligence able to work together, such as the groups who go house to house dragging out survivors and murdering them.  Other times Baggers even are able to hold conversations and pretend to be survivors, waiting for their time to strike which leads to some cool plot twists.  Roberts really doesn't shy away from describing the acts of the Baggers, such as school bombings, carers killing infants with poisoned juice, while descriptions of the crazies roaming the streets armed with crowbars, and baseball bats just brings images of violence to mind.

The main characters themselves are not perfect either, many with deep flaws, bad decisions are made along the way which leads to pain and suffering for other survivors. One such scene was straight out of 28 Weeks Later with someone abandoning his group to the mercy of the Baggers, while other characters argue, get drunk, and don't make any attempt to help people in need for fear of getting caught themselves. It is interesting that some characters who appear seem like they are going to be key people only to get killed a few chapters later, is a nice touch that anyone seems up for being killed off at any point.

I seriously could not put this book down, I read it in two sittings, only stopped the first time as it had gotten to 2AM, I even read it on the bus; I get travel sick really easily so just shows how much I was into it that I even chanced getting ill to read it. Nearly all the chapters end on cliff hangers, all four of the stories are exciting with some awesome scenes such as a chase through a blizzard, getting caught in the middle of earthquakes, and the suspense of being stalked through buildings leading to a spectacular finale which arrives perfectly paced. I can't remember the last time I was so engrossed in a book like this.

This book has everything a horror fan could want, no matter what your age. A thrilling road trip with a unique take on zombies, though with similarities to Brian Keene's The Rising (similar though his did have a talking zombie lion!). Interesting though I am not sure how this could be made into a series and still feel as fresh as it did here, but Roberts is definitely an author to keep your eyes on.