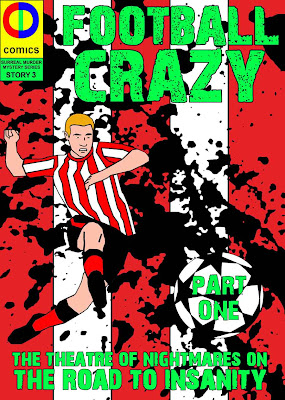 I was pointed to a site recently which deals in as they term it 'Surreal Murder Mystery Graphic Novels'. These are online comics that have a thriller edge to them. So far there have been 3 different tales. The first one is called 'Meadowhell: The True Horror of Shopping about security guards being murdered at a shopping centre. The 2nd one is based on Jack the Ripper titled 'Spring-heeled Jack: From the Tunnels of Hell', while the third one 'Football Crazy: The Theatre of Nightmares on the Road to Insanity' is about a serial killer picking off players from a winning team.

I was lucky enough to read part one of Football Crazy. It is not so much horror as crime based with it's content. It follows some detectives as they investigate the murders and try to piece together who could have done it and why.  It has the feel of a Detective program such as Inspector Morse, or A Touch of Frost. There is not any horror in them. I dislike football and have long said football fans are crazy, so is a fitting subject. The art style is quite strange but works, kind of basic but at the same time it catches the eye and is very striking. The story is well paced. 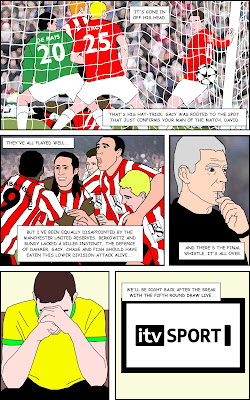 All 3 of the comics have clues throughout to lead you to who the murderer is, the issue I read certainly made me want to read more (just to find out what the murder weapon was). If your interested in these then pop on over to Drive-Thru Comics where they can be picked up for under £1 each. Also for news on these and upcoming comics in the series check out the writer and artists website here. Not bad, just not horror either.

AN UPDATE: I have just read part 2 of Football Crazy, and it was really quite funny, much more humour than part 1 had. There were twists that were surprising, and the vein of funny running through the whole thing really hit the spot! Full of hidden Easter Eggs as well it really hits the description of a 'surreal murder mystery'.

Posted by Daniel Simmonds at 06:43