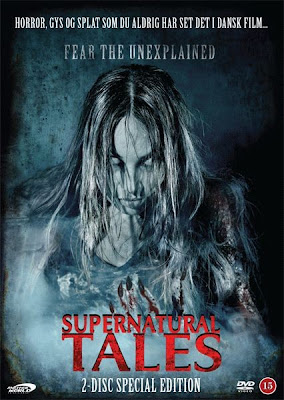 Released on 6th May was Supernatural Tales; a DVD compilation of 16 short Danish horror films. These were all first shown at a Movie Battle competition in Denmark where the theme was 'Supernatural Horror'.  Previously there was a release based on the theme 'Wasteland Tales' which also sounds interesting.

Released by Another World Entertainment the double DVD  has over 280 minutes of horror. As I have been saying recently there is something about short horrors that really creep me out no matter what time of day and circumstances I see them in.

If your interested in getting a copy of this then head over to Laserdisken or MovieZoo. I myself am too poor to get a copy but it does sound like it has the possibility to be good.
Posted by Daniel Simmonds at 11:22