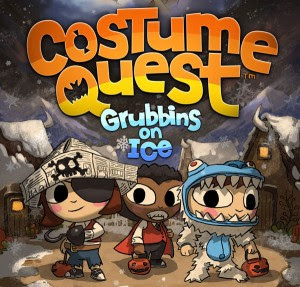 Costume Quest was a real fun, simple RPG about some kids who fend off a monster invasion during Halloween.  Grubbins on Ice is the first (and so far only) downloadable content for it.

Some weeks after the events of the Costume Quest Lucy and Everett discover a strange artifact, they accidentally trigger it which creates a portal.  Lucy heads into the portal to see where it goes, Everett meanwhile gets the other 2 kids and together follow.  They discover it leads to the home world of the monsters who invaded Earth in Costume Quest.  A monster called Araxia has taken control of the Monster realm which has led to an uprising.  Working with the monster rebels you must find a way to the top of the mountain where Araxia rules and defeat him as well as rescue Lucy (who he kidnapped when she appeared in his world). 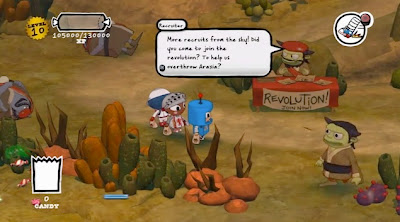 At just under 2 hours there is not a lot of game here, but it is bright and fun, and more Costume Quest is welcome.  It follows the same format as before: going from door to door to battle monsters, as well as solving simple fetch quests.  You get access to 3 new costumes (that affect how you fight in battles) which include a Skeleton Pirate, a Yeti, and a flying Eyeball.

The enemies you face this time around are skull faced ones, the baddies of the first game now on your side that made a nice twist.  Short and very sweet Grubbins on Ice is worth a play if you loved Costume Quest.

Posted by Daniel Simmonds at 03:50