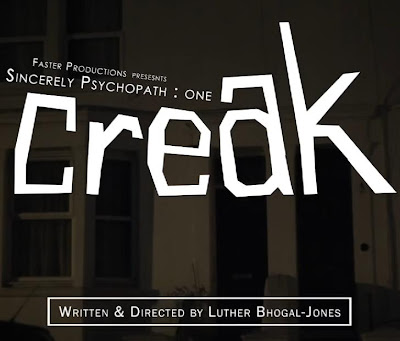 Way back in February I was given a link to a horror short titled Creak created by Luther Bhogal Jones. It was intended to be part of a series of horror shorts put together under the banner of 'Sincerely Psychopath'. Intended for later this year are two other horror shorts by Jones, I look forward to these. The Facebook page for his production company can be found here.

It is true to say the film does nothing new, but then that was not the intent of the director who wanted to just create a fun, short, disposable film. With that he has succeeded. I don't know what it is about short horrors but they send the chills right down my spine. I think it is due to there never being enough shown for anything to ever be totally explained or resolved, usually short horrors end on scary cliff hangers, here is no exception! Needless to say there is an intruder in the house, and one that looks very weird, only glimpsed in shadows and for split seconds the intruder is effective.

What more is there to say? The film is well shot, some of the sound was a little unbalanced but it creates a tension filled 5 minutes that is definitely worth seeing, check it out below. Now I'm just going to go check downstairs, I thought I heard a creak...