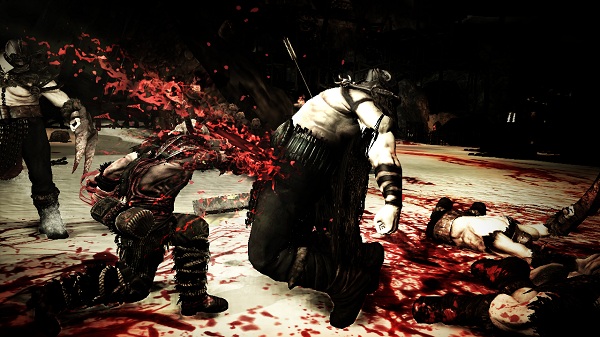 Bloodforge is a grim and violent fantasy slash em up that takes place in a Conan the Barbarian style world.  Here are my thoughts on the demo.

An unskippable story tells of how the main character (a barbarian) has nightmares of his fighting days.  He awakes to find the world on fire. Then he is attacked by monsters. That's it really. The action took place in an arena which saw waves of enemies jumping down from the cliffs to fight you. You have light and heavy attacks and when enemies are stunned they can be finished off (usually by slicing them in half). The game has a 300 style look to it with sepia colours giving everyone a bronzed look.

The demo was quite short, I hope the whole game is not just fighting enemies in arenas as that would get tiring quickly. Still it is bloody, and apart from the camera controlled well. Bloodforge is an X-Box Live Arcade game that is available for 1200 Microsoft points, kinda steep. 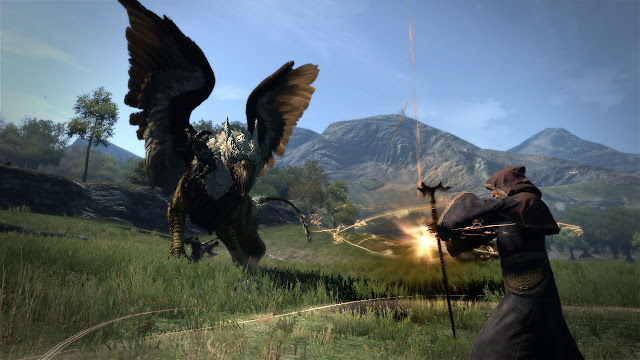 Dragon's Dogma is a Japanese made fantasy RPG. You fight through a fantasy land battling mythical creatures. The demo has two levels to try. The first is set in a castle, you play as a Knight. Plenty of goblins are around to fight, and it ends with a fight against a chimera (half goat/half lion/half snake).  You have three A.I controlled people with you who seem kinda competent. A nice bit happened when one of my colleagues held a goblin so I could finish it off.

The second level takes place in an open field. A griffin attacks you and your team. Fire spells set the feathers of the giant bird on fire which was a cool touch. The game doesn't look fantastic but was fun enough, is on my wish list for when it goes cheap enough.
Posted by Daniel Simmonds at 11:49