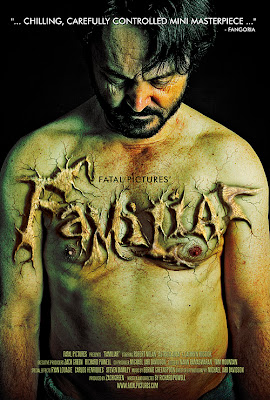 Familiar is a short film from Fatal Pictures, directed by Richard Powell and produced by Zach Green. The film centres around an average looking family whose lives fall apart.

Robert Nolan stars as John Dodd the Dad of the family unit.  The film centres on him with much of the dialogue of the film being what appears to be his internal monologue. He detests his family seeing his daughter as a parasite and his wife as his jailer. The voice in his head forces John onto more and more evil things until he starts to wonder if the voice in his head is even his own. 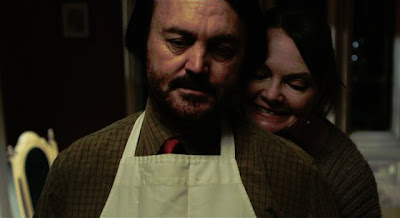 At around 24 minutes long the film never has time to get boring.  The film revolves around Nolans character with a lot of scenes being close ups of his face as his ugly thought process is revealed.  Being privy to the thoughts made me feel dirty and unclean.  The wife and child are both nothing special but that's what make them work, they could be any ones family, John could be any man. Around the half way point things turn up a notch as John starts to rebel against the unnatural thoughts. Is it a man battling schizophrenia or is something more sinister at work?

Being shot in HD the film looks terrific, slow direction builds up the creeping dread.  The music is sublime being morose and bleak perfectly in tune with what is happening onscreen.  Robert Nolan is fantastic as the middle aged man slowly going internally insane and gives the film a real power right up to the gut churning ending with some quite cool special effects throughout.

I would advise against seeing the teaser trailer as it spoils the films ending but for more information on this check out the Fatal Pictures website.