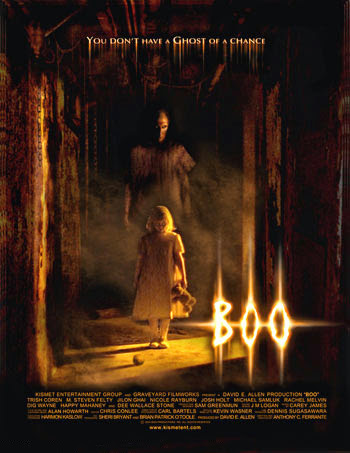 Boo is a ghost film kinda in the vein of Ghost Ship and House on Haunted Hill (the remake). I am glad the film makers called it Boo, and not Boo! as there is nothing remotely exciting about this dreary, muted film.

It's Halloween and a bunch of College students head off to a condemned hospital that is reputed to be haunted to have some Halloween fun. Also heading there is a son of a cop who is looking for his sister who vanished a few days previously. It turns out the Hospital is actually haunted, the group find themselves trapped inside by spirits that do not seem to want them to leave the third floor. With possessions, hallucinations and spooky goings on they need to find a way to escape. 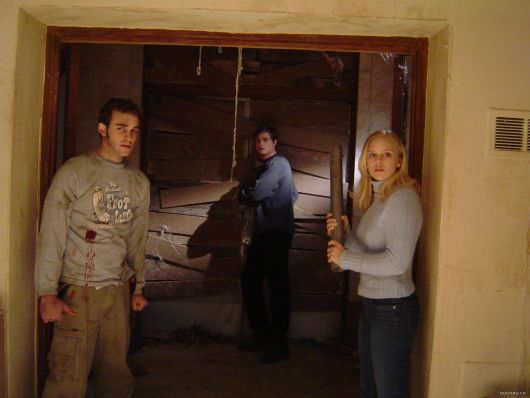 This film is terrible, as in totally terrible and not really that interesting. The ninety minute run time drags and drags, I had to watch this in three chunks, each time was like an eternity. People wandering up and down dull lifeless corridors is just not interesting. The acting is truly terrible with the usual annoyances such as characters who get over their supposedly close friends deaths immediately, ones who decide to 'get it on' with each other totally inappropriately, and actors who cannot do emotional transitions (the token jock spends half the film shouting his head off in between random periods of calmness). It is all very awful, there is just not enough going on to even have a remote sense of dread or horror. Whenever characters are going to escape the hospital there is always some lame contrivance to get them to once again head back to the damn third floor, home of cheesy flashbacks and an oh so spooky ghost child.

The plot is nothing special and takes itself far too seriously for such a poor film. Special effects are ok, too many computer generated ones (possessed victims always explode in a burst of digitised gore when shot). A zombie dog early on is kind of funny, and the film does have an actual zombie who periodically reappears throughout (the best character as she kills the really really annoying jock). Ghosts do the boring thing of moving in fast forward and warping around, all so tiring. 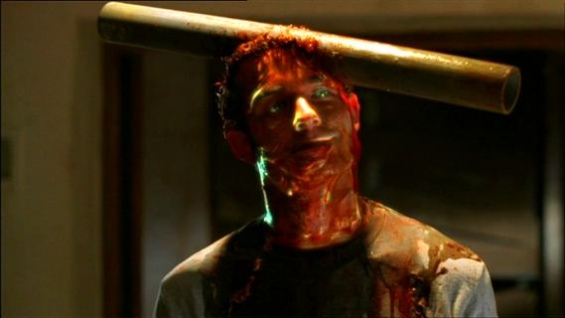 Boo is not scary, jump scares sign posted from miles away, characters you can not care about, and a bland lifeless hospital that for some reason fails to invoke horror. Really do not recommend this, while not the worst film is still a poor, poor film.

Posted by Daniel Simmonds at 03:52