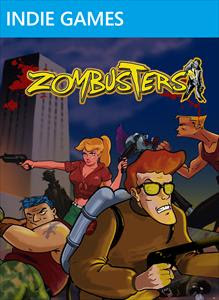 Zombusters is yet another arena based zombie wave based survival game but this time comes with a fresh perspective of a 2D isometric view that is quite high up.  You can choose one of four characters to play as including one who looks like Egon Spengler from Ghostbusters (obviously a nod to the film, as is the title).  Each level sees you in a different section of a large city where you must survive ten waves of zombies.  In the demo (yes, I review demos if they are of the Indie variety!) I first started in a park that had roads surrounding it (a nice touch was a burning car), the 2nd level saw me in a concrete square lined with trees, also with roads passing. 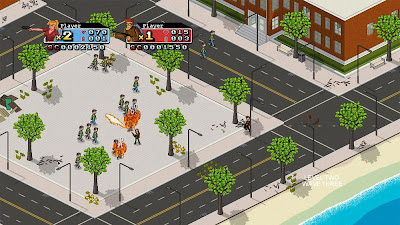 The zombies advance in packs and operate as one, much like shoals of fish. One bullet is enough to fell each of them., likewise if you get touched by the zombies you die. Some downed enemies drop health, and different weapons such as a machine gun. They are silent save for the groan they make when you kill them.  The first couple of levels are quite easy, the zombies get more numerous and get quicker but perhaps a bit too slow to ramp it up.  Zombusters supports up to 4 players.

There is licenced music over the top that seems unrelated to the action on screen being comprised of indie songs that are easy enough on the ears but didn't really fit the action.  The game looks bright and colourful, and you have to love the isometric graphical style! All in all not bad for what it is, and a nice change from the usual arena game, but hardly essential purchasing.