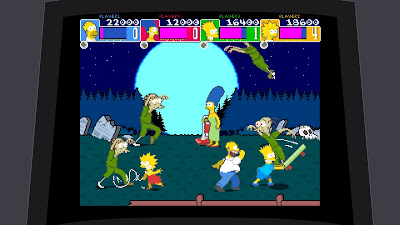 I'm all for the surprise appearance of zombies in videogames.  With the recently released The Simpsons Arcade on XBLA I was surprised and delighted to see those rotting fiends show up on level 3.  The game features many many different enemies out to stop the Simpsons from rescuing Maggie from the clutches of Smithers.

The Simpsons Arcade is a 4 person scrolling beat em up.  Level 3 starts off in a graveyard.  Soon zombies are clawing their way up from the earth.  They claw and leap but are easily dispatched.  After the initial waves red skinned zombies appear, a homage that Resident Evil remake paid homage to with its crazed hyper zombies.

Zombies are so great that they appear in everything it seems!
Posted by Daniel Simmonds at 13:34