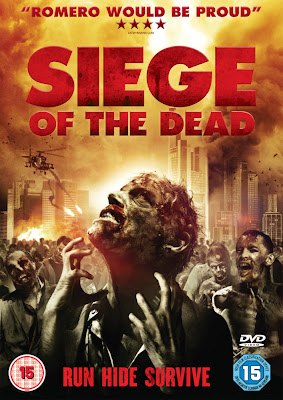 I have had Siege of the Dead for some time now.  It is a German film, the first German zombie film I have seen (sure Dead Snow had Nazi's but the film was Scandinavian). Why do so many cheaply made zombie films have near identical covers of a zombie infected City?

Michael has recently broken up with his Gabi; his girlfriend of 7 years.  Using the excuse of returning her apartment keys he has travelled to Berlin where she lives in the hope of getting back with her.  Upon turning up at her flat in a small apartment complex things soon take a turn for the worse.  After being attacked by a crazed plumber Michael and the plumbers apprentice; teenage Harper barricade themselves in Gabi's apartment. Hearing shouts and screams outside they look out into the courtyard to see a bunch of insane people chasing down and killing a couple.  News reports reveal that Michael has unknowingly stumbled into a City wide outbreak of violence caused by some sort of virus that turns its victims mad with rage.  Now under siege with the other inhabitants of the flats he has to find a way to survive the siege and hopefully locate his missing ex. 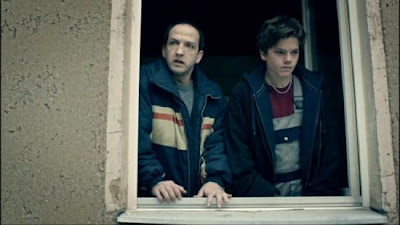 The main character of Michael is a very normal guy.  In his late 30's, balding, slightly overweight and with bad teeth he is hardly the hero you would expect and he doesn't act like one.  He is obsessed with finding his ex and a lot of his problems stem from this obsession.  Zombie apocalypse is bad enough but being stranded in your exes flat makes matters far worse.  Everywhere Michael looks he sees reminders of Gabi; photos, pictures on a camera, her clothes.  Surrounded by memories and with no idea if she is safe or not it is a Hell far more personal to him than any zombie apocalypse could cause.

All the characters of the film are entirely normal and this is what makes it work.  The characters really reminded me of the ones in Run Lola Run, all totally normal looking and acting.  The real hero of the piece is Harper (Theo Trebs) he is actually proactive where all the adults are too wrapped up in their own small problems to do anything useful.  It is Harper who finds a way to battle the zombies (though not dead they are very zombie like, responding to noise, and biting their victims). 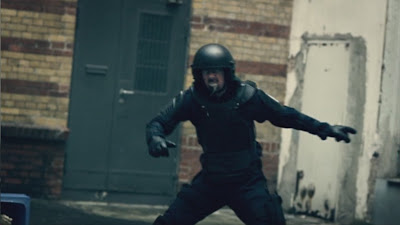 The film is bleak in a realistic way, but has a vein of dark humour such as the obsessive Michael who is very protective of Gabi's belongings to the point of stopping Harper making weapons from her cutlery ('she will go mad if she comes back and finds out what you have done to her forks!') and the ever changing rooms the two have to retreat to as their defences get destroyed by the zombies.

The main score of the film is really good, bleak, modern and emotionless it sets the tone for the whole film, normal people, in an urban environment.  At just over an hour long the film is short but feels a good length, it never drags and never feels like it is being rushed leading up to a quiet ending that resolves Michael's storyline satisfyingly. 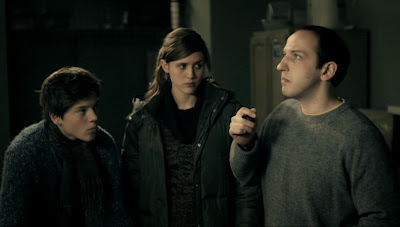 Zombie effects are not over the top, mainly zombies are recognised by the foam frothing out their mouths, and white contact lenses, there is a good amount of the infected as well, virtually no violence but it works.  Though in German the acting is very good, no over the top performances gives the film a realistic vibe.

Posted by Daniel Simmonds at 13:50