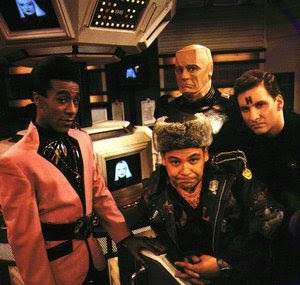 I got the complete collection of Red Dwarf for Christmas.  Red Dwarf is a classic British Sci-fi comedy that stars Craig Charles as Dave Lister; a slob, and the last human alive, Chris Barrie as a cowardly, back stabbing hologram Arnold Judas Rimmer, Danny John-Jules as Cat (a being evolved from Cats), and Robert Llewellyn as the robot Kryten.  While a lot of the episodes have no horror element to them there are also quite a few which do have horror.

Polymorph - taking a lot of cues from The Thing this episode features a chameleonic, emotion-sucking, genetic mutant that is running riot on Red Dwarf.  The crew have to try and discover what it has changed into and destroy it before it sucks away all their emotions. 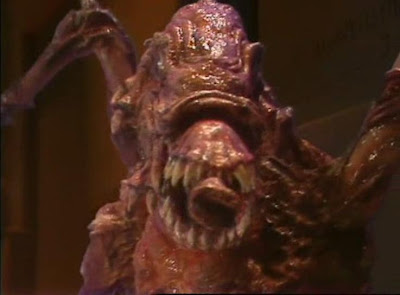 The Inquisitor - a deranged android uses time travel to travel through time deleting from existence everyone he sees as having wasted their lives.  In their place he inserts people who never got a chance at life.  He comes across the Red Dwarf crew who realise they are in deep trouble.

Terrorform - Rimmer is stranded on a deserted planet which terraforms into a vision of his own mind.  Full of such self loathing the planet turns into a nightmare reality where beast and monsters roam.

Quarantine - Rimmer puts the rest of the crew into forced quarantine after they get exposed to a holo-virus. It soon tuns out that Rimmer has contracted the virus and is totally insane.  This episode is quite chilling actually! Who thought a man wearing a gingham dress, pigtails wig, and a penguin sock puppet on his hand could be scary! 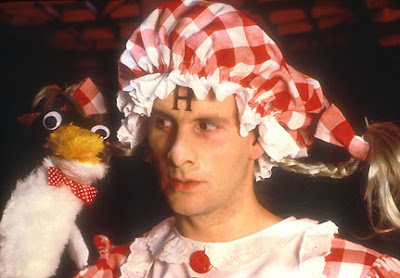 Demons & Angels - Red Dwarf is split into two different ships; a heavenly one full of beauty and love, and a evil  foul one that is a hell hole ruled over by evil versions of the crew who want nothing more than to kill them.

Ok, so that is actually it for proper horror themed ones.  There are lots of episodes that feature horror parts; such as Pete that has a rampaging Dinosaur, as well as various evil doppelgangers who turn up throughout the shows, and crazed human hating androids.  Still Red Dwarf is a great comedy show and is well worth a watch! The Series 7 episode Epideme even features a zombie.
Posted by Daniel Simmonds at 12:25