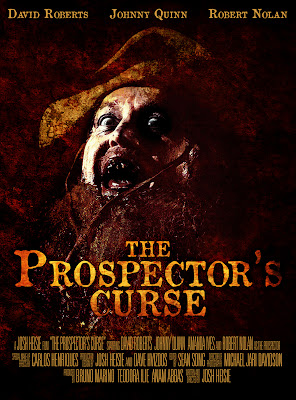 I very recently heard tell of a short horror film being made titled The Prospector's Curse. It might sound like the title of a Scooby-Doo episode but reading about this film it actually sounds genuinely worth watching.

Set in America during the Klondike Gold Rush of the 1890's it features a tale about two wanted criminals who stumble across a dying prospector out in the wilds.  Promising him a decent burial they instead steal his gold, and as with all great morality tales this results in the corpse of the prospector coming back to life to get his revenge!

The film is described as a darkly comedic western-themed horror. Dark comedy is the best type and if the tagline is anything to go by the humour will be quite good (the tagline 'there's blood in them there hills!' made me smile).  Written and directed by Josh Heisie The Prospector's Curse is currently in post production and due for release soon.  The Facebook page can be found here.
Posted by Daniel Simmonds at 09:38