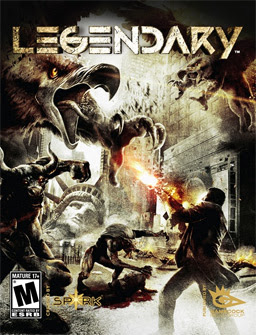 Legendary is a FPS with a fantasy twist.  The game has an original premise but just cannot stay at the heights it sometimes gets to due to sloppy programming, glitches and bugs.

You play as a professional thief called Deckard who has been hired to steal the contents of a mysterious box.  Upon locating and opening the box a strange sigil gets burned onto your hand while a strange light bursts out of the box causing a gigantic earthquake.  Leaving the museum the box was located in you emerge to see a New York under attack by thousands of monsters right out of myth.  It turns out the box you opened was Pandora's Box and with its opening it released all of the worlds evils, or in this cases monsters.  First just trying to survive against the Griffins, Dragons, Werewolves and other mystical creatures you are soon being hunted by a group of soldiers called The Black Order who you were unknowingly hired by and who now want you dead so they can retrieve the box. 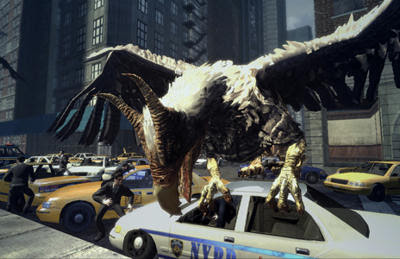 The games premise is really good, and frequently the game is able to cope with the story beats.  The first third of the game is set in a New York being devastated by giant Golems, earthquakes and Griffins.  By the time the section is done you have witnessed hundreds of dead bodies and massive destruction on a tremendous scale.  The 2nd half of the game sees you head to London.  In a matter of days the monsters from the box have sweeped the globe, killing millions.  Despite you being responsible for the destruction of the world your character never seems to have any guilt over events which is a bit odd.

The game looks ok, it was an early 360 game so looks a bit bland.  Combat is slightly different as it sees you fighting monsters for the most part. Werewolves are the main monster type, boss battles comprise of more deadly creatures such as Minotaurs, Griffins, and a epic battle in front of a ruined Big Ben against a huge Kraken.  Levels are quite linear and are broken up with simple puzzles usually involving you shooting a flashing green object, or turning a valve.  Weapons are the usual fare, while your sigil on your hand can be used to heal yourself as well as power up machines (replenished by energy dropped by downed enemies). 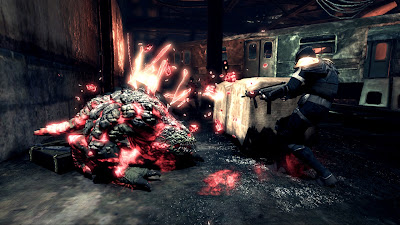 Unfortunately for every thing the game does right it does so much more wrong.  It is very glitchy, and deceptive in that you have to be a good distance away from any type of wall or cover when you shoot otherwise you will be shooting at invisible walls.  Very frustrating to throw a grenade only to have it bounce off a invisible wall and blow you up.  Soldiers you face seem to have random energy, sometimes shooting an enemy 3 times will kill him, while on some occasions the exact same enemy type I had to unload two whole clips into before giving up. A few times I had to reload my save after events that need to happen to let the game continue just didn't happen.  It is telling that the very last thing I witnessed in this game was it crashing midway through the ending (seemed to be setting the game up for a sequel; fat chance!) Unskippable cut scenes are another evil, especially one in particular that I was forced to endure (no joke) about 40 times in a row being set just before an intensely hard boss battle.

Underneath all the utter badness is a good game that is screaming to have a polish.  If only more time had been spent to iron out the hundreds of bugs then this game would have been fantastic.  When everything is going well the game is a joy to play, it has just left a bad taste behind as the last few levels especially crumble under bad programming.