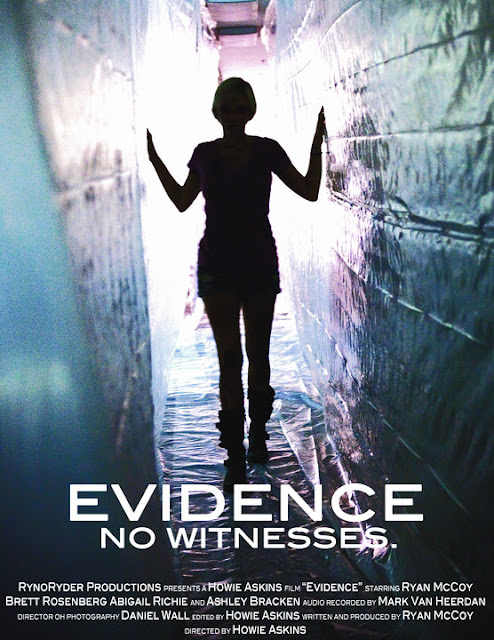 Wow, just seen Evidence and I have to say what a total head f**k of a film!  It is a found footage film in the mould of The Blair Witch Project, Paranormal Activity, and Cloverfield. I have to put a warning that I might have some spoilers in this review, I really don't to ruin this film as the twists are utterly bonkers and put a huge cheesy grin on my face as they got revealed.

Four friends head off on a camping trip in the wilderness to make a documentary about one of the group; Brett who has never been camping before.  It isn't long before strange events start to happen. Mysterious screams and growls at night, along with the sighting of strange figures, and then the disappearance of one of the friends leads the group to believe that they may be being stalked.  Ryan; the filmmaker of the group is fascinated by the strangeness and seemingly unconcerned about the dangers he might be subjecting his friends to by forcing them to stay in the remote nowhere. 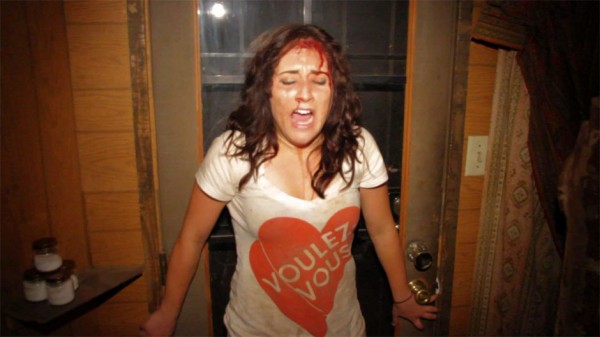 The film pulls a lot of twists and has fun doing so. The film channels the spirit of The Blair Witch so closely at times that I found myself wanting to check to see if it was actually a remake. It is very similar to start with, a good familiar feeling of knowing what is going to happen and sitting down for the ride. The character of Ryan (Ryan McCoy who also wrote this) is such a psychotic nerd that it makes you wonder how he ever become friends with the group, who start off mildly annoyed with his camera antics and turn to outright hostility as they argue and fight with him. I don't know how Abi ever become Ryan's girlfriend as there is zero chemistry between them. That is reflected in the film as the relationship between the two turns sour relatively quickly.

Somehow part way through the film it changed genre without me even realising, changing into some sort of crazed fever dream and moving far far away from the 'lost in the woods' style of film I expected it to be. I want to say so much what happens but to do that would be to ruin the surprises. 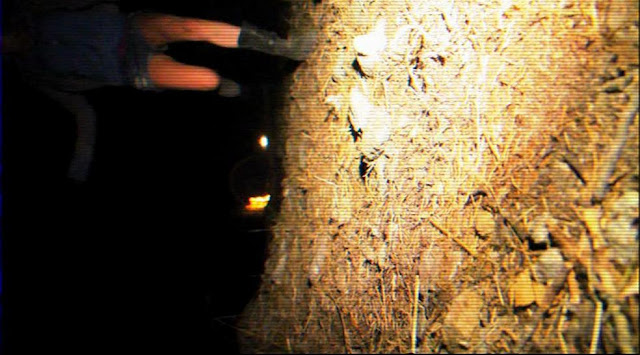 It is a definite creepy film, but It does lose some of the fear initially when the source of the evil hounding the group is revealed. It is always more scary what your mind conjures up than seeing the actual thing. Evidence is really well shot and looks crisp with lots of shaky running sequences and scenes shot in the dark with added effects just to remind the viewer that it is being filmed on a hand held camera. Unlike The Blair Witch missing people are found in some grisly ways which look great.  The dead bodies in this film look amazing with some clever reveals.

The plot is the weakest part of the film with the excuse for the camping trip poorly explained. The ending is quite a bit confusing also, though the end credits that are integrated into the last section of the film are very cool. It could be said that the film does loose some of its impact when it goes bananas but by then the hooks are in you to keep you watching. I really enjoyed this thrill ride, what started as a well made clone turns into pure excitement, whilst the characters are for the most part fleshed out and made to feel more realistic than the usual pretty teens running around screaming. If your going to watch this film then don't watch any trailers, or read up about it, just go in blind! Evidence is released on DVD 12th March 2012 courtesy of Showbox Home Entertainment.