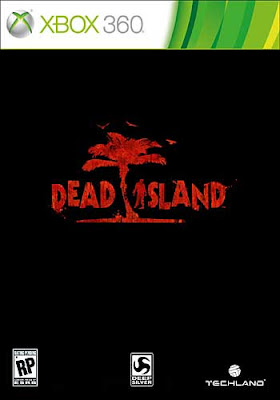 Dead Island is a first person role playing zombie survival game set a small island.  It is similar in feel to Borderlands at times, in the fact that vehicles can be driven. the game is intended for four player co-op, and there are many different open world areas littered with hundreds of side quests.

The game takes place on the resort Island of Banoi the night after a party at the resort hotel.  Four characters wake up hung over in the hotel - hotel clerk Xian Mei, former football star Logan, bodyguard Purna and rapper Sam.B.  The hotel is in disarray and an evacuation signal is playing over the loud speaker. Encountering strange humans (zombies) the group are chased until cornered and attacked.  Waking up an indeterminate time later they are told by a group of survivors that the whole island has been over run by flesh eating zombies, and that the fouir seem to be the only people who are immune to the disease.  What follows is a series of fetch quests, and minor tasks as the group are sent out to bring aid to the groups of survivors holding out all over the island.  Oh, and also a strange transmission is being broadcast over the radio by a shadowy figure that promises the group salvation if they can locate him. 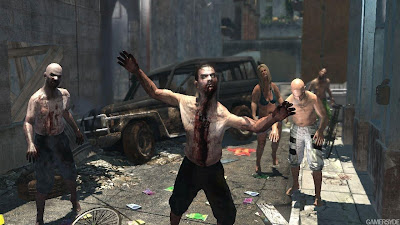 I love this game! Intended for four players I played through it all (as I am want to do) on my lonesome, well after I discovered how to turn off online co-op (that is strangely set as the default option and requires a quit out of the game to change) I headed off into the beautiful island.  The game is set in a variety of beautiful and different locations.  Starting off in the resort area you are in a giant area in which the zombies are spread out, the island stretches off into the distance and if not for the blood and gore everywhere (as well as hundreds of beach clad zombies and zombabes) would be idyllic.  The sun is beating in the sky, and the surf washes against the shore.  Later locations I don't want to ruin too much but include a gigantic city full of slums and sewers, as well as inland where the jungle and bandits reside.

The locations are very varied and really make you want to see whats next, each place is vastly different to the last and brings its own tone, as well as its own zombies (eg: security guard zombies at the hotel, and tribesmen zombies in the jungle). 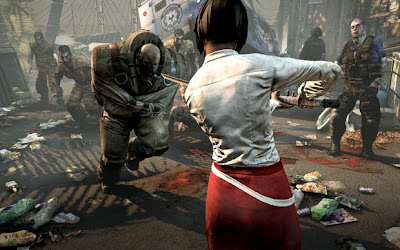 The zombies...oh the zombies! They are ace in this game, they really are, varying between runners and shamblers they attack on their own, in groups, and even just ignore you as they bumble around or feast on dead bodies.  They really look the part being in various states of decomposition; some have their insides hanging out, others have various parts of their bodies missing.  In the vein of Left 4 Dead there are also boss enemies that are introduced as you progress.  A hulking brute in a straight jacket charges at you, a bloated fat zombie spews acidic bile, one has his arm bones sharpened into spikes while yet another is slow moving but a giant powerhouse able to knock you literally flying with one swing of his beefy arms.

You attack mainly by melee weapons, each character specialises in a certain weapon type, Xian Mei (the character I played as) specialised in sharp objects, so I stuck to them throughout using swords, knives, axes, to hack up the zombies.  Arms can be sliced off, heads decapitated, and legs hacked to make zombies move slower.  Blunt objects such as baseball bats and police batons can be used to break enemies limbs.  Weapons can be improved by the use of work benches as well as modified to have different effects, such as a machete that can electrocute enemies, a baseball bat wrapped in barbed wire, and guns whose bullets can poison zombies.  Parts need to be collected to do this, and cash (that can be found everywhere) is used to repair damaged weapons. 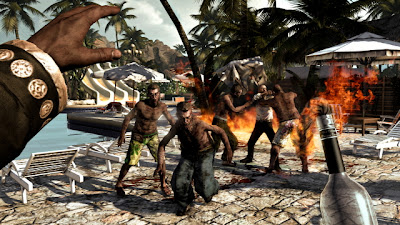 As you progress you get experience points that make you stronger as well as give you a point into your stats (such as the ability to instant kill downed enemies, higher percentage of weapon damage, and longer special times). Each character has a unique ability that can be used once your bar is powered up.  My character went berserk where the screen goes grey with enemies showing as bright red and your knife skill drastically improving for a limited time.

There is so much to talk about with this amazing game.  My playthough lasted about 25 hours so it is really an epic zombie survival game that seems more realistic than others of its type. Missions can be plain (such as searching for food) but also more poignant such as a man who tasks you with returning to his flat to kill his zombie wife and child, or putting up posters around a city for a man who hopes his wife may see the poster and know he is safe. 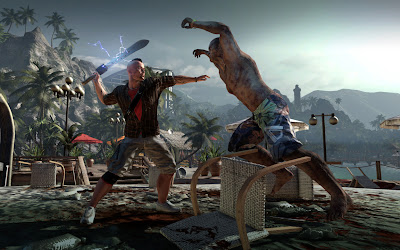 The game has many faults it has to be said.  A lot of bugs got ironed out after release but some still persist.  One particularly annoying one was where you are unable to access your weapons, doing so makes your character swig from a bottle of alcohol making you swerve all over the place.  This usually happens after running and is very frustrating to turn around to battle the zombies chasing you only to find your not allowed access to your weapons.  The human characters you encounter and the zombies are the same model type, there is not much variation with most people looking the same and having some very dodgy Australian accents, and even found someone with a Manchester accent.  All very odd sounding.  For all the back story the four main characters get, there is very little story for them which is slightly disappointing.  The plot itself is basic but the cause of the zombie outbreak is actually quite refreshing for a change (despite some red herrings of toxic waste in the sewers and a suspicious remote laboratory).

The game succeeds as it really feels like you are in the middle of zombie apocalypse.  Having passed out from your wounds at the games start you have missed the initial week or so of outbreak so the island is in a static state of collapse with many stories told by the many characters and people you encounter.  Files can be found that are quite boring (giving real life facts and information about the area of the world the game takes place in) but the audio tapes are very well done, and kind of chilling chronicling a reporters journey through the outbreak of the apocalypse.  At times the game is ham fisted making some characters one dimensional but at other times it can get quite moving (never getting to the limits achieved in the trailer though). 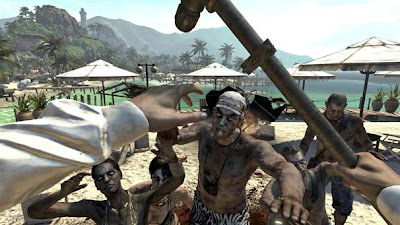 Very well recommended, if you like zombie games and want to know what it is like to be in a zombie apocalypse on a tropical island then this is the game for you! Now I'm off to play the DLC...