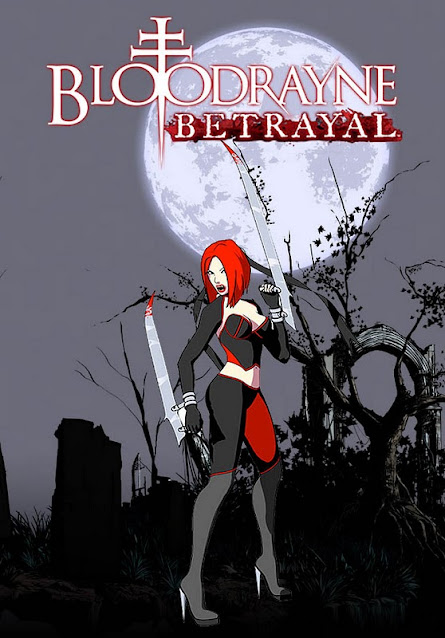 The original BloodRayne games were wonky third person actioners that had you fighting mostly Nazi soldiers. I was initially put off by BloodRayne: Betrayal as it reminds me of the death of my interest in the Joystiq Podcast which imploded after a disastrous change in style, due to the game being an item in that very tedious first episode. Anyway having played the demo and seeing the game in a sale I picked it up.

BloodRayne: Betrayal sees you (playing as half vampire Rayne) joining a group of vampire hunter soldiers called 'The Brimstone Society' in assaulting an underground castle of vampires. Starting above ground you eventually get to the castle in a mix of 2D platforming and fighting. 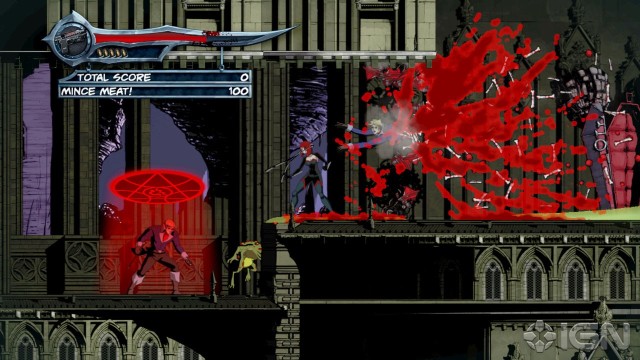 BloodRayne: Betrayal is very reminiscent of old Castlevania games back when they were level based. Everything from the Gothic look, down to the dramatic music really invoke the spirit of those classic games. The setting of a vampire's castle is also super similar. None of this is a bad thing, I love the Castlevania series so a pretender to the throne is very welcome.

Being a half vampire you are allergic to light, in the early levels there are UV lamps set up that drain your health if you get near them, these only feature in the first few levels though. More could have been done to incorporate these into the game I feel. A lot of the enemies you fight can have their blood sucked out. This makes you invincible during the sucking as well as restores lost health. Enemies consist of Aryan looking vampires, as well as clawed monsters, floating mummies and even giant walking bubbles filled with blood. There is not a lot of different enemies types but combat is quite a detailed affair with enemies having different abilities and weaknesses. Usually when you encounter enemies the game will limit you to a single screen until a few waves of them have been dispatched.

The game looks beautiful, like something out of an anime. There is plenty of blood, and the animations are great, especially the vampires who appear in the foreground before leaping into the game; very smoothly done. Boss battles are usually against giant monsters and quite fun, one in particular that was made out of blood looked really good.

Levels unfortunately do get repetitive, you would think with a whole castle(vania) to explore there would be variety but a lot of the levels look very similar. A section of levels see you traversing pits of acid, while others see you with rivers of blood but all play quite similar. Levels are full of traps from rotating blades to spikes, lasers and collapsing platforms. These require quite a degree of mobile skill to get past but in a good move enemies are not resistant to the traps so can get minced up, burnt up and drown just the same as you. Some sections see you go into silhouette which might look good but makes finding where you are on screen quite confusing. The last level set in a burning castle is a nightmare due just to the fact that it is really hard to see where you are located on screen. 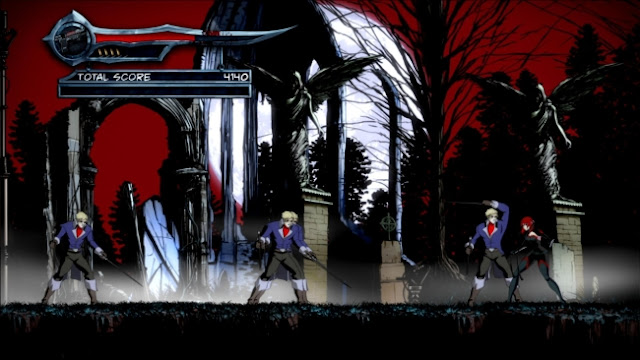 Hidden around levels are skulls that let you increase your health and bullets in your gun (a special weapon), and there are some sections when you control a raven that gives some variety. You later get the ability to turn into a bird at will but this is severely restricted by the arrival of machines dotted everywhere that stop you being able to change; begs the question what's the point of giving you that ability if the designers blatantly didn't want you to be able to use it? The plot is bare bones and not interesting, mostly told by a series of speech bubbles coming out of characters mouths

For all its issues I did enjoy BloodRayne: Betrayal, it is just a shame that it is barren when it comes to variety, more interesting locations, and a greater number of enemy types would have made the game a lot better.