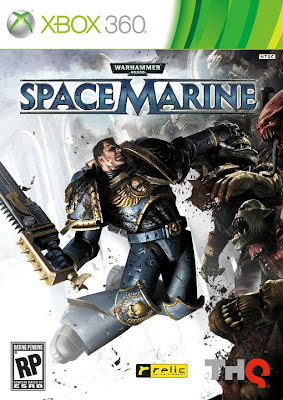 I realise I have been focusing on games a lot recently, I sometimes feel I neglect films.  I do aim to get my Unlimited Cinema card back soon so I guess I will be seeing more films when that happens.  Warhammer 40,000 Space Marine is a 3rd person shooter set in the Warhammer 40,000 universe.

I don't know much about the Warhammer 40,000 universe other than it is a universe in a constant state of war. Space Marine takes place on a forge planet (a world entirely devoted to weapons manufacture I think) that has been invaded by a horde of Orks.  Sent in ahead of the rescue fleet are a trio of Space Marines (basically human tanks).  You play as one of the Space Marines; Ultramarine Captain Titus.  Starting off with the goal of repelling the Ork invasion events take a more sinister turn when *spoiler* the forces of Chaos arrive. 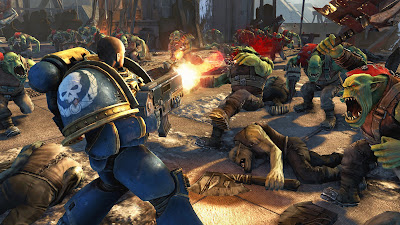 The game is  bare bones action, the most you have to use your brain is pressing elevator switches.  Being a Space Marine you are not able to go into cover, your supposed to be super human and the game makes you feel that way.  You have access to both melee weapons (chainsaw swords and power axes) as well as a variety of guns such as a bolt gun, flamer, and several sniper rifle type weapons. The Orks swarm you and while weak on their own try and beat you with numbers.  Being very powerful Orks get ripped apart left, right and centre as you cut a bloody swath though them.  For a 15 rated game it is very gory, at least when it comes to the green skins.  Heads pop, limbs are severed and enemies literally pop in a ball of crimson gore.

To split up the fighting there are several sections of alternate fighting.  In these sections you have access to a jet pack which lets you briefly take to the skies before doing devastating ground pounds.  There are also a few brief turret sections but other than that it is a case of slicing up close enemies while shooting far away ones.  Stunning an enemy lets you do an instant kill on them which rewards you with a health boost at the risk of damage from other nearby enemies.  The emergence of Chaos two thirds in gives you fights against more bullet intensive enemies.  Boss fights are infrequent and not very good, the last boss was a nightmare and nearly ruined the whole game for me. 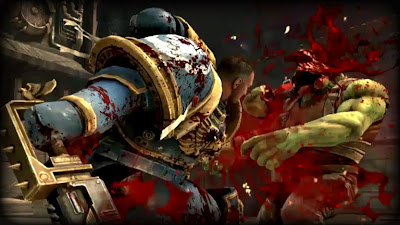 The game looks good but it is a shame that the location of the Forge Planet is so boring and bland.  It is supposed to be, but still drags with its lifelessness and ruins.  One brief level set in a desert brings a nice slab of variety, as well as a fun train section but other than that it is stupidly large concrete structures all the way.

The plot is straight faced nonsense but features some action packed cutscenes.  Hidden in the levels are audio recordings from various people.  It does give some more human feeling to the story of alien invasion but none of the audio recordings are particularly interesting, I certainly never felt compelled to seek them all out. 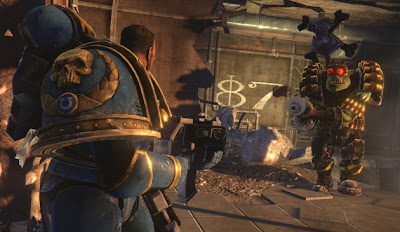 A fun game but more variety in the locations and activities you get up to would have been better. Still fulfils the blood lust urge we all get once in a while and is entertaining mindless fun.