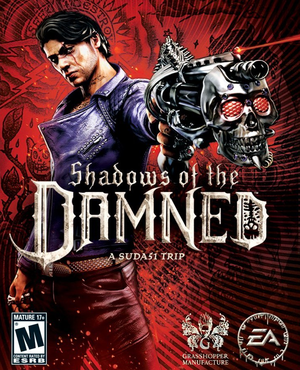 Shadows of the Damned is a game created by a true dream team.  The music is provided by Akira Yamaoka (he of Silent Hill fame) while it was created by Shinji Mikami (the creator of Resident Evil) and Suda 51 (responsible for the bonkers Killer 7, No More Heroes, and Flower, Sun, and Rain)

You play as Mexican Demon Hunter Garcia Hotspur whose girlfriend Paula is abducted by the Lord of Demons; Fleming and taken to Hell. Garcia follows, and is joined by rogue Demon Johnson (a magical floating skull who doubles as a torch and motorbike).  To get to Flemings Castle Garcia must fight his way through Hell, forever keeping the deadly darkness at bay. 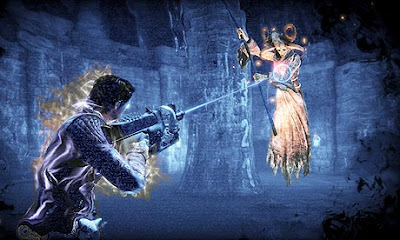 The game is a 3rd person action one, resembling Resident Evil 4's style of over the shoulder gun play.  It is quite over the top and starts as it means to go on. As soon as Garcia gets to the underworld he gets on a motorbike to ride the Highway to Hell for a fast paced intro sequence (pure Suda 51).  The game is level based, taking place over 5 chapters that sees Garcia travelling from Demon Town to the countryside on his journey to Castle Hassle where Fleming resides. Along the way he battles 1000's of Demons as well as being plagued by images of the death of his girlfriend who is repeatedly being killed in different ways designed to torment Garcia.

Johnson is your weapon, changing to one of 3 different guns that roughly equal a pistol (fires bones), machine gun (fires teeth), and shotgun (fires skulls),  Red gems collected or brought from the shop can be used to upgrade your weapons to make them stronger and faster while blue gems bosses drop upgrade your weapons (such as being able to power up your shotgun to fire a giant exploding skull) 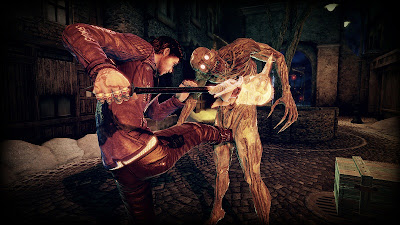 Most levels see you solving simple puzzles such as locating keys for doors, or locating goat heads to hit with your light blast to repel the energy sapping darkness.  Darkness plays a big role, some switches can only be located when you are in the dark, while the light repels enemies.  The Demons you face are all invincible when in the dark.  To break up the simple puzzles and shooting there are some fresh segments.  One level takes place in the red light district of Hell and sees you defending your position from approaching giant Demons using a giant gun called the Big Boner (activated by Johnson calling a sex line in a phone box), while a few levels see you in a 2d side scrolling shooter that has the look of a puppet show.

The game has a rich vein of humour running throughout though does a good job of being serious when it needs to be.  A lot of the humour comes from Johnson who provides a commentary on the locations you visit with a wry delivery.  Books can be found in the game that provides a story of how one of the games bosses came to be in Hell.  These are narrated by Garcia or Johnson and there are lots of comments from the characters as they read. The whole of Hell is shown as a place where Demons happen to live, rather than the place damned souls go when they die.  Also there are some cool nods to Evil Dead, and Ghostbusters that made me chuckle. 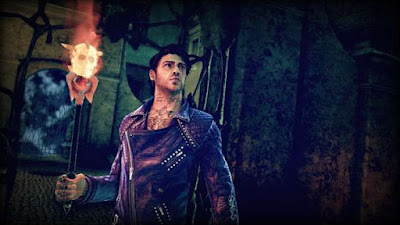 Enemies range from weak demons whose limbs can be shot off, to armoured ones, crawling demons, giant cyborg demons and more, all have the same visual style to them.  Bosses are more fun such as skinless George whose presence can be told due to the harmonica stuck in his throat.  The bosses all take different means to kill and are exciting to fight with the exception of the last boss who is very frustrating as it takes so damn long to kill him.

The soundtrack is very Yamaoka and would not be too out of place from a Silent Hill title while the humour and sound effects are obviously Suda 51.  The game has the feel of Resident Evil 4 at times with combat being more fluid and fast paced due to the inclusion of a dodge button and a quick turn. 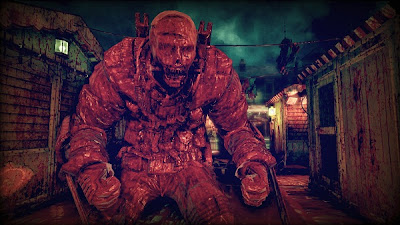 I had a lot of fun with this title, under looked and certainly has its issues (one type of enemy if not killed correctly causes the game to become stuck) but a real rock and roll action packed blood soaked journey, and Garcia F*cking Hotspur and Johnson are great foul mouthed hilarious characters.  Well worth a play.