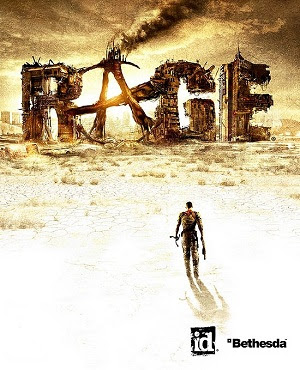 Rage is the long awaited game by the Id Software (who did the FPS classics Doom and Quake).  It is a FPS that features a combination of traditional FPS levels mixed up with driving sections.

Rage takes place in an apocalyptic wasteland.  A meteorite hit Earth destroying civilisation.  A chosen few were entombed in stasis pods (called Arks) and buried deep below the earth, the Arks were programmed to resurface for the Ark survivors to  rebuild society.  Rage starts with your Ark coming online over 100 years since the meteor hit.  With the rest of your group dead in their pods you leave to find yourself in a desert wasteland where bandits and mutants roam.  A few settlements exist where the population try to live, fending off bandit attacks and ruled over by a self appointed governing body called The Authority.  Soon you discover The Authority are tracking you and that their intentions are not friendly. 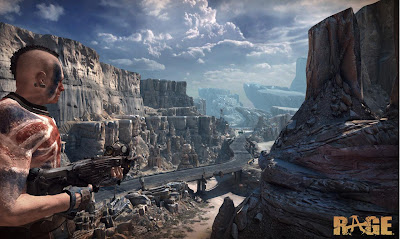 Rage feels like Borderlands more than Fallout, it is hard not to compare it to these games what with them all being FPS games set in post apocalyptic worlds.  Borderlands in particular as that too had both shooting and driving, item collection and sectioned off levels.  Settlements provide you with side missions, shops, and mini games (including a fun Top Trumps game). The driving sections are really just a way to get your character from A to B, they look nice but are a bit filler to be honest. The action levels are where it is at.

Each level is set in a different location, usually a piece of ruined history.  There are many different Bandit clans, each with their own distinct look to them.  The Jackals are based in a giant canyon and attack with tomahawks and crossbows while shrieking, the Gearheads are armoured in sports wear and reside in a Bank, while the Ghosts have their base in an old 5 star Hotel.  Other locations include a subway station, power station, an old deserted city and car workshop.  Each location has its own distinct look and is fun to fight though with lots and lots of detail packed into the surroundings, as usual it is the obligatory futuristic location that brings the game down, always bland! 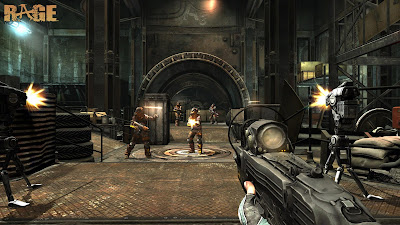 The graphics are probably the best the 360 has ever witnessed, character models are very good looking, while everything for the most part looks great.  Texture pop in is an unfortunate issue that persists for the game as is some objects that are blurred (such as photos).  The sound effects are awesome and really give weight to your weapons.  I don't know what it would sound like to shoot someone wearing metal armour with a machine gun but this game gives a good idea!

The different clans and soldiers you fight all behave in different ways.  Enemies usually do one of two things; hang back and try to shoot you from cover, or charge you.  The charging enemies are the most interesting, they duck, they roll, kick off of walls and swing from the ceiling all in one fluid movement as they advance on you making it tricky to hit them.  Your main weapons are the usual fare, they have alternate ammo such as the crossbow firing electric and explosive arrows but are all quite traditional. There are many recipes you can make using parts found in levels.  These can be used to make some cool items such as the three pronged boomerang which can be flung at enemies and sometimes get embedded in their heads, a remote control bomb car, as well as sentry drones, spider bots and grenades. 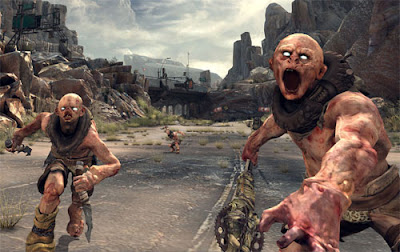 For all the game does it is a shame that the plot is very weak, and missions linear.  The game on the 360 is spread over 3 discs but I was disappointed to discover (after a poor and abrupt ending) that only 2 discs are used for the main game.  I really loved this game, and for the 14 or so hours I was playing it I had a literal blast, a bad end to a game always leaves a sour taste in the mouth but the game with its solid action levels, decent enough driving levels (there is a whole slew of optional races you can do to get credits to mod your vehicle) and great graphics is well worth experiencing.

Posted by Daniel Simmonds at 04:33