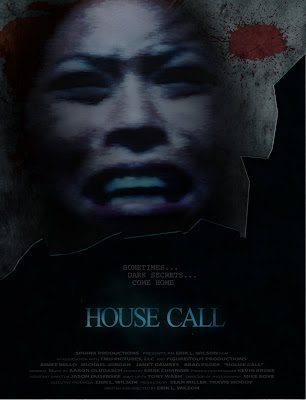 House Call directed by Erik L. Wilson is currently being submitted to film festivals, I was lucky enough to get to see this short (17 minute) film.

Janice returns to her violent husband Dave and murders him.  A year later and her and her new boyfriend Steve have moved into Dave's house and are celebrating their one year anniversary.  It soon turns into a night neither will forget as strange supernatural happenings lead them on a one way path to horror.

With a short run time and four characters it was important that the film not get bogged down in scene setting.  Right away though the four characters are established.  Janice (Aimee Bello) and Steve (Michael Jordan) are shown to be very much in love as they talk about her husband and his crazy Mother.  Most the film takes place over the one night.  Mother (played to super creepy effect by Janet Gawrys) seems created to live in darkness, the contrast between the darkness and herself is sublime, while the husband Dave (Brad Egger) is stereotypical in his white trash sort of way but gets the job done in making him out to be a nasty piece of work. 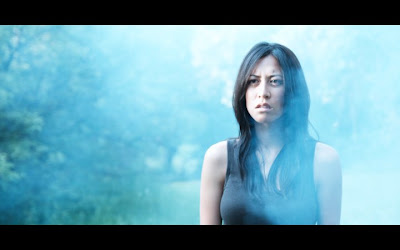 Often with short films you loose quality and it is to be expected but I was pleased to see here that no quality has been spared, this has the look and feel of a big budget film, helped by the excellent use of a RED ONE camera (better than HD quality cameras).  House Call looks crisp with wonderful use of light and shadow to bring terror and suspense.  One slight fault with this is that sometimes it is just too dark to tell what is happening on screen.

I was surprised at how quickly the film descended into Evil Dead territory, that's not to say the film is cheap and schlocky, just that it takes that story element and makes it serious and almost terrifying. The special effects are great for the most part, especially the blood which looks beautiful.  The ghostly fog that appears now and again is ok also and fits into the film quite well.  The opening and ending of House Call features trashy generic rock which is a shame but thankfully the music used for the actual short itself is much better fitting.

The quality of this short is quite something, that along with decent acting, and a good direction makes an effective package and a well done spin on a traditional revenge story.

Posted by Daniel Simmonds at 05:38