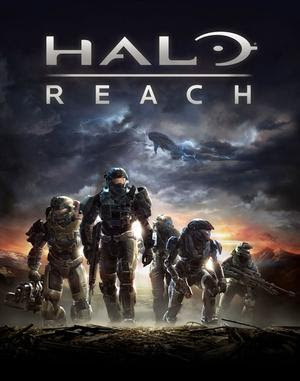 I have to start off by saying that in general when I review games I only review them based on their single player content.  This is due to having no one to play online with (and I am not about to play with strangers). So bearing that in mind here is my review of the single player campaign of Halo Reach.

Being the last Halo game to be created by Bungie (the team who created the Halo Universe) I expected Reach to be an epic send off and the premise certainly makes it seem that way.  Set before the other Halo games this one chronicles the fall of Reach; the home world of the Spartans (basically genetically engineered super soldiers).  From the very off you know there is not going to be a happy ending because a) in the Halo lore Reach and all the Spartans where destroyed and b) the game starts with a shot of a wasteland with your cracked and battered Spartan helmet laying on the ground.  You play as Noble 6; a recent addition to Nobel team that is composed of 6 different Spartans.  Starting with the discovery of a Covenant attack on Reach (Covenant being an alien collective army) it chronicles the invasion leading all the way to the final escape of Planet Reach by the surviving humans.

I was disappointed upon first playing to find it plays like all the other Halos.  I don't know what I was expecting so I should not have been put off but I have never been a huge fan of how Halo plays.  After getting over this I fell into the pattern.  Once in the groove Halo does become meat headed fun.  The plot is nonsense and doesn't really make much sense as always. more a way to take you from one set piece to another.  With the rocky music that gets your blood pumping along with the sheer joy of wading into a battle and emerging victorious you really start to feel like a bad ass.  For a good third of the game I had this feeling, excited to get onto the next vast mission.  One mission in particular was great just for the change in pace; you start off in a City under attack armed with just a pistol, when you finally meet up with other humans they are really glad to see a Spartan making you feel quite empowered.

Combat is the same as ever, taking enemies out using a combination of brute force, guns, grenades and  vehicles.  All the favourites appear with the exception of The Flood (though confusingly one solider I met was babbling about them).  So you get the traditional Covenant aliens along with the Gorilla ones of Halo 2 + as well as the insectoid ones from Halo 3.  You get all the usual weapons including the cool melee weapons of Covenant sword, and the giant hammer some of the Gorilla aliens wield. 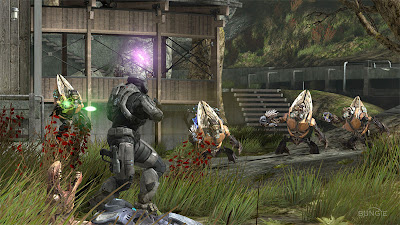 Being a Spartan you get access to different power ups, these include a force field, jet pack, ability to run, ability to project a hologram, and an invincibility.  These were cool additions but didn't really change up any tactics (the force field is ace though).  To break up the pace of the main shooty action there are a few driving sections including a refreshing space battle, and an epic fly through a ruined City.

I expected a dramatic ending to the game, the music is certainly there to make you aware of how desperate and doomed your journey is but I was sad to see the last level was nothing special at all.  It was frustrating more than anything, a long slog through a ship yard that saw you constantly bombarded by grenades and a damn powerful green laser that a lot of the enemies seemed to posses and which kills you in one hit if you get hit directly. 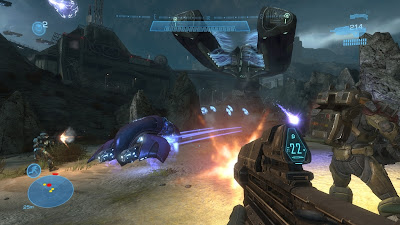 All in all just another Halo game; neither better or worse than any that have come before, great soundtrack though.

Posted by Daniel Simmonds at 06:28