The Gathering is a (now) monthly comic anthology that focuses on a different genre each issue.  It is written by a whole host of contributors and gives both established writers and n up and coming ones a chance to shine.  Genres covered so far included romance, heroes, hope and despair, and of course that old favourite horror!  Both Issue 4 and Issue 6 are horror anthologies.

Issue 4: Into the Abyss 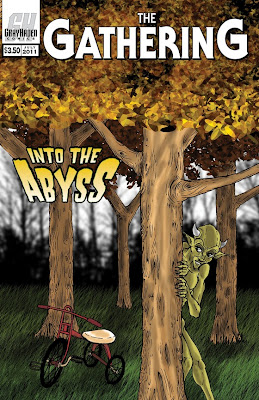 Into the Abyss features over 2 dozen short horror stories including one by Glenn Greenberg (of Hulk and Spectacular Spider-Man fame).  There is a lot of variety in both the stories and the artwork, wildly different, all in black and white.  Quite a few vampire stories appear such as Bloodless that tells a cautionary tale of what happens if you don't properly create a vampire.  A couple of zombie stories also appear (always great to read).  The aforementioned Greenberg has a zombie tale with a twist in the form of Prey for the Damned, while later on another twisted zombie tale turns up in the form of Undead Me.

There is just so much variety and so much skill at using only a few pages to create something truly memorable.  A highlight in terms of story telling is The Tree by Brian Defferding and Travis W.Howard that has 24 panels all focusing on a tree throughout history and the evil that has ravaged about it.  Totally text free but really quite chilling.  Another highlight was the realistic The End of an Afternoon's Street Fighting that is apparently based on true events and follows a group of soldiers relaxing after a day of fighting during World War II, the final panel is pure genius.

Not all the stories look great though, 2 in particular are ones from the web, drawn very simply but still having fun stories.  First of these is Lucky Sweater followed by Unfinished Business both submitted from nakedgrapecomics and both silly but still having a horror story at its fun core.

With over 20 stories there are going to be some not quite as good though.  The first story Trapped leads the anthology to a bad start as it is really hard to make out what is supposed to be happening with its abstract art style, after 5 or 6 reads I still could not really tell what happens due to the weird look of the thing.  Another one I did not enjoy much was There's no such things as Monsters that has the look of a newspaper comic strip and tells a quite boring story that thankfully does not drag on for too long.

All in all though I did enjoy this anthology as I usually do.  There is a variety of different art styles, and for the most part the stories are well drawn with clever use of limited space.

Issue 6: Further into the Abyss 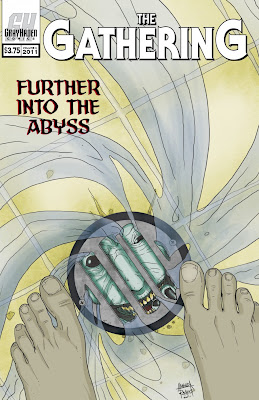 After Issue 4 I was looking forward to reading this one.  The strips all seemed to be longer this time around. It starts off strong with the bizarre but entertaining Inflated Evil, but this is then followed by part 2 of the boring Zipper Club that already outstayed its welcome in Issue 4. The comic reaches a high point with the sci-fi horror The Station by Glenn Matchett and David Aspmo about an abandoned space station.

Elsewhere werewolves make appearance in several strips and it is good to see more zombies.  The Mistress has a film noir feel to proceedings about a woman wanting to kill her wealthy husband.  A charming looking tale set in Hell called Perdition is let down by a confusing ending, while The Knocker just does not go anywhere.  The Tipper Ripper is really fun, but it is end story Jack, Unblinking by Travis M.Holyfield and Chris Page that leaves a lasting impression.  A creepy and sad tale that is quite the twist on a well loved children's toy.

Again there are a variety of art styles used, some of the art is amazing, Ye of Little Faith has art work that makes the whole strip seem like something from a music video, Arcadio Bolanos turns a simple tale into something special.

All in all another ace anthology collection!

The Gathering is a wonderful idea, if your interested in getting a hold of these cool comics then they can be purchased at Gray Haven Comics.  A third horror anthology is due to appear this year, I for one really cannot wait, I may be even tempted to read the non horror anthologies.
Posted by Daniel Simmonds at 16:21

Hello, Daniel. Thanks a lot for your comments! Sometimes it can be really discouraging for me to write or draw a story and hearing absolutely no opinions about it. I know people are buying The Gathering, but it'd also be great if more readers do what you do: share your thoughts, without fear of being too judgemental or too nice.

By the way, thanks for your words about my 7 pages in "Ye of Little Faith", and I assure that my 5 pages in the upcoming Sci-Fi issue are probably some of the best things I've done.

Thanks for this review. I really want to read his comic now.

That's quite all right, thanks for the response, I look forward to seeing your future work