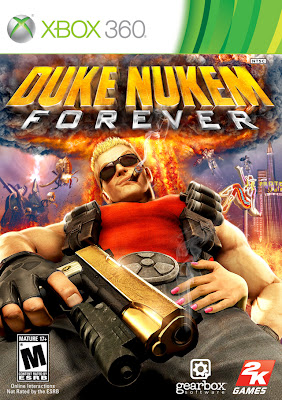 15 years in the making Duke Nukem Forever is a game many never thought would ever see the light of day.  Has it been worth the wait?

In the quarter of a century since Duke saved Earth in Duke Nukem 3D Duke has become the most famous person in America. He has casinos, burger bars, toys and cars all named after him, he is worshipped by everyone.  An alien mother ship has appeared over the City of Las Vegas where Duke lives.  He is forbidden to engage the aliens by the President as it is not known what their intentions are yet pretty soon the City is under alien attack and it is up to Duke to fight his way through the ruined city to not only stop the alien menace but also to rescue all the 'babes' who have been kidnapped by the aliens. 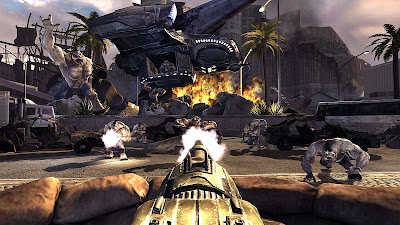 Starting off in the casinos of Las Vegas you fight on to sewers, desert, and the Hoover Dam.  Locations are dull and lifeless, by the games last third I was just wishing for it all to be over, racing through areas praying for the level to end.  Combat is ok, the enemies from the previous games (Pigcops and Hover pack aliens) all come back looking different. Boss fights are all terrible and mostly quite frustrating as Duke gets knocked on his back all the time and punished by the high power of the bosses. 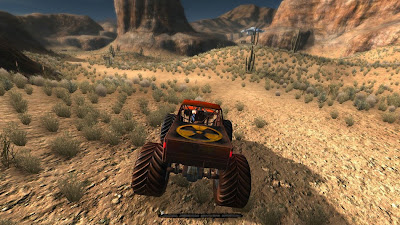 Humour has always been a part of Duke games and here it is no different.  The humour is mostly really lame and focuses on 'hilarious' dick jokes and mickey takes out of other games (such as when there is some Halo armour in the back of a van).  Halo, Gears of War, Half Life and even Donkey Kong are all referenced but when your making fun of other games it would help if your game is actually any good.  The NPC's are quite amusing though they only really feature at the games start (one highlight was a NPC telling himself not to geek out when you appear, then he geeks out and faints in a weird Gary's mod style way)

What does it do well then?  A few sections see you shrunk down to insect size, you have to traverse shelves while avoiding normal sized enemies who try to squish you.  These levels were a breath of fresh air.  I recall a  cool set piece set around a mobile home that ended with it tipped on its side. The weapons all feel solid and there are some nice extras such as a time line of Duke Nukem Forevers development cycle. 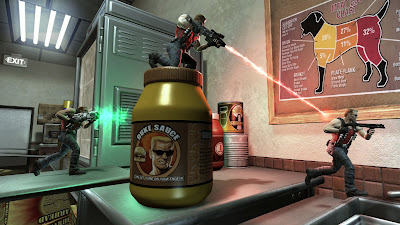 The constant sexual innuendo along with plenty of female nudity (both alien and human; the alien queen boss has three giant breasts) really bring this game down and make me embarrassed to be playing the game as nudity can be handled maturely in games.  Duke Nukem 3D is still a great game, I really wished they had just made a modern style game in that ilk rather than spending the last 15 years jamming as many other games gameplay mechanics into one misfitting and meandering shooter.

On an end note; the load times for this game are insane, I literally got in a cycle of waiting a few minutes for the level to load, playing it for 30 seconds, dying, then having to wait another few minutes for it to load, especially frustrating on the awful boss battles.

Posted by Daniel Simmonds at 02:30

Thank you for the great review, as sad as it is. I just now got Duke Nukem Forever. I rented it with my Blockbuster @Home service from DISH. I have been a Duke fan for a very long time and this was one of the few franchises that needed a revival. Unfortunately, the game couldn’t possibly live up to the years of development time, especially with so many hands stirring the pot. Only after 45 minutes of failed and restarted installs on the PS3 was I able to play. You can tell that DNF passed from company to company, each whittling down what used to be a great character. With all the shooters out today I really expected more from the controls. The whole game feels like a blocky, laggy online match. I have heard that it is only a 9 hour campaign but I had to put it down a few hours in and switch to something more refined, Skyrim. I don’t have any due dates or late fees so I can keep DNF for as long as I want. My initial intention was to complete the game if only for the sake of nostalgia but I just couldn’t do it. The one liners were great, but jokes alone don’t make a game. Thankfully I can send it back and get another game in a few days. As an employee I was pretty happy when DISH announced the service. As a gamer I am very disappointed by what they did to Duke. Out side of some great Duke lines, there isn’t any real value to this game. I can’t imagine how bad multiplayer would be, if there were anybody on.