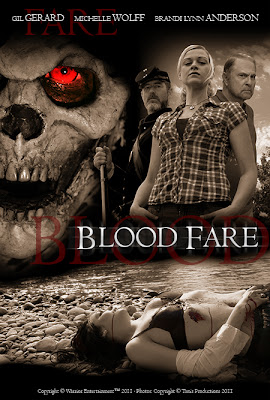 Am doing some admin at the moment and catching up with all the emails I have been sent.  One email was about a film called Blood Fare.

Blood Fare is described as a civil war ghost story with a modern twist.  From the press release and the trailer it seems that the main characters ancestor was killed during the civil war, upon his death he did not have money to pay the Ferryman who transports the dead to the afterlife and so a curse was placed on his blood line which equates to a grim reaper looking figure chasing young people through woods.

The acting seemed of a low standard but it is hard to tell just by watching a two minute trailer.  To be honest I have seen enough 'psycho chasing people through woods' films to last me a lifetime, maybe this one is different. It does have special effects by Chris Hanson (did special effects for Hellboy, Underworld, Men in Black) and features some established actors such as Gil Gerard (played Buck Rogers in the TV series).  The historical aspect of the film seems interesting, and it certainly is well shot and looks clean and crisp.

Blood Fare I would imagine will be out this year, I will probably check it out, it could be good.
Posted by Daniel Simmonds at 03:09

BLOODFARE:THIS IS AN INDEPENDENT PRODUCTION WHICH IS A BREATH OF FRESH AIR! HOLLYWOOD IS FULL OF MINDLESS TWADDLE WITH NO MORAL OR GUTS IF YOU WILL! WARRIOR ENTERTAINMENT HEADED BY J.A. JAQUE STEEL BRINGS STORY TELLING BACK WITH HEART FELT WISDOM FOR YOUNG AND OLD! I DISCOVERED MS. STEEL BY GRACE OF GOD! LEAVE THE PSEUDO INTELLECTUAL DRIBBLE READ: "I CANT DO RIGHT OR WRONG" AND ENJOY A SHOT TO THE HEART! WHERE THE HEROINES HAVE THE GUTS AND MORAL COVICTIONS WE SHOULD CHERISH IN REAL WORLD!! AM I J.A BIASED? YES!! MY HEART IS TOO!! ENJOY A GOOD MOVIE!!! DAVID CHAINSAW PORTER.

lol, your certainly passionate, and I will definitely be checking this out when it is released : )

Also, judging by the cover, it stars SKELETOR.

I always wondered what he had been up to since He-Man.