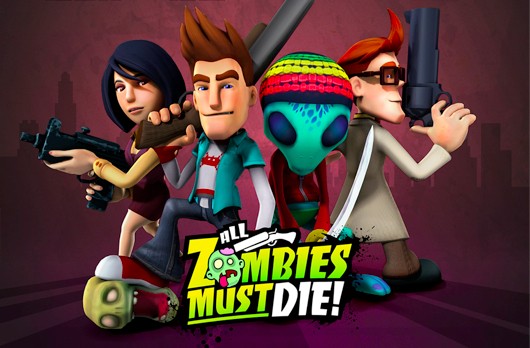 I had a feeling that All Zombies Must Die! is a spiritual successor to the very average Burn, Zombie, Burn! and so was in no great hurry to trial the demo.  Lo and behold the demo was good though, and has made me want to play the whole thing.

All Zombies Must Die! takes place in a town overrun by zombies. Rather than lame killing zones you instead get to traverse through the town and even better there is a story. The game is split into smallish areas of the town and each one you are tasked with finding the next exit. The exit is always guarded by a robotic barrier which gives you a mission such as kill a certain number of ghouls, or locate an item hidden in the level. 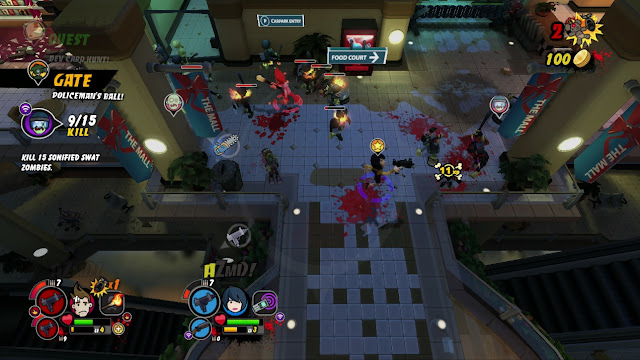 The demo gives you four different levels. The first one gives you an introduction to the game and a shotgun, while the second one takes place around a police station where you are tasked with locating another survivor hiding out. The third area has you exploring houses in a posh part of town while the last area takes place on a bridge out of town and ends with the appearance of a boss; a normal zombie made giant by a puddle of toxic waste.

As you kill zombies you get experience points to level up with. Exploring crates rewards you with extra ammo and experience items (such as finding a psycho's knife). The whole look is cartoony and is similar to the look of Burn, Zombie, Burn! but very crisp and attractive to look at.  The music is really good, one in particular was a homage to the Halloween theme from the John Carpenter classics.

If I get rich or this goes on sale I will definitely buy it, at 800 Microsoft points it is not that expensive.

Update (24/06/2019) - I did eventually end up buying the game and was disappointed to find it became really quite dull and boring quite quickly.
Posted by Daniel Simmonds at 07:50