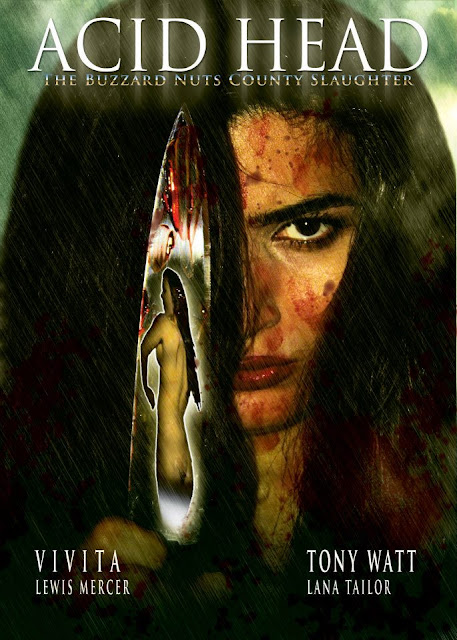 Acid Head: The Buzzard Nuts County Slaughter is certainly a mouthful, but with director Tony Watts previous works Vixen Highway 2006 and Frankenpimp it seems weird titles are the order of the day.

The film seems to be a slasher that stars Vivita as an acid scarred goth girl slasher who butchers her way across Buzzard Nuts County then vanishes.  A year later she is back for more vengeful killing. The film looks to have no budget, terrible special effects, bad acting but this all seems very intentional and it does not take itself at all seriously.

Watching the trailer I can only guess that the writers were on acid themselves. Very trippy and B-movie like it introduces Acid Head herself.  Characters are all over the top and wearing very bad fake wigs.  An interesting looking film, it just stands to see if it can carve a place with its bonkers style or if there is just too much of the stuff over actual substance.

Acid Head: The Buzzard Nuts County Slaughter is due for release on VOD and DVD Spring 2012.
Posted by Daniel Simmonds at 09:52