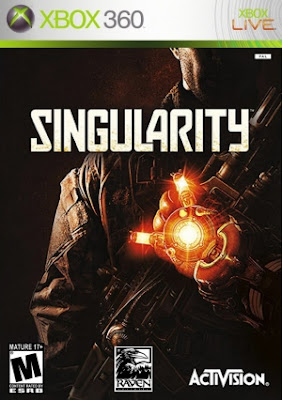 Time travel stories are always interesting, they just really satisfy an itch, who wouldn't want to travel through time, and who has done so and not screwed up time?  Timeshift was an early 360 game that was ok but let down by frustration, Singularity is a much better game that has elements of both Bioshock and F.E.A.R.

After a huge electromagnetic surge damages an American spy plane a small force of US Soldiers are flown to the small island of Katorga-12 that used to be under Soviet rule and where the surge radiated from. Another surge causes the helicopters to crash land killing most the Soldiers.  The island had been uninhabited since 1955 when an unknown disaster caused the Russians to abandon the island. Playing as Captain Nathaniel Renko your initial aim is to get to a radio tower for extraction.  While exploring the island you somehow enter a time portal that takes you back to the 1950's.  In the 50's you rescue a scientist from burning to death in a fire before time shifts back to the present.  You soon discover the present day has changed dramatically; the island is full of strange mutants, as well as Soviet troops, it seems the Soviet Union rules the world in this weird present, something has changed to alter the path of history. 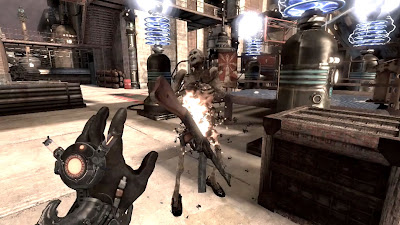 The game has a very impressive start, exploring the island of Katorga-12 you are immersed in lots and lots of detail; posters, notes, and audio recordings, a real sense of place that brought to mind a very familiar Bioshock vibe.  The game is very slow to start and gives you a leisurely pace to explore and soak in the islands background.  Shapes are seen through windows, shadows pass you by, and when you finally encounter enemies they are zombie like and weak.  A jaunt through a School complete with bodies of children everywhere tells a wonderful visual story picked up by the scenes left behind.  About a third of the way through the game though this all stops.  From then on the game is a shooter in the F.E.A.R mould but with none of the breaks, just shoot out after shoot out.  The locations devolve into warehouses, sewers and laboratories that loose any sense of real locations that you would want to explore.

Time is used to great effect.  Soon in the game you locate a special wrist band that gives you time manipulation powers.  You can rapidly age enemies turning them into dust, repair destroyed walkways and crates, slow down time and levitate objects (Half Life 2 inspired).  Pockets of time give you ghostly cut scenes from the islands past while plot based moments see you travel back in time to fight 1950's Soviets that give old locations a lick of newness.  One great level sees you on a giant tanker that literally ages before your eyes using a nifty Silent Hill style transition from sparkly new to rusting and aged.  Small puzzles use time but these never get too varied.  A favourite is putting a ruined crate under a steel shutter and then rebuilding it to cause the shutter to open. 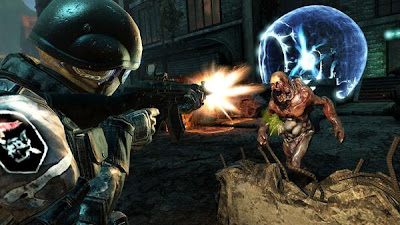 The game has a variety of enemies, the Humans are mostly cannon fodder but are armed with a variety of weapons and later ones wearing time manipulation impervious suits.  Monsters are not that excitingly designed, having the appearance of zombies, conjoined twins, giant spider type things, and irritating bugs that explode on contact and attack in swarms.  As well as your time wrist watch thing you have access to usual weapons such as rifles, pistols and rocket launchers.  These are given new looks to them but basically operate the same way as usual.  One cool weapon is a rifle where you get to control the bullet (like the sniper rifle in Jericho) and cool bouncing bombs that can be remotely detonated (and is used for a puzzle just the once).

The plot starts off really interesting but in the end falls apart due to bland characters of the main antagonist; cruel dictator Demichev, and good guy Scientist Barisov who are cookie cutter plain and predictable.  There is a late game twist that is kinda fun, though obvious.  Notes and audio diaries are interesting and give a sense of the island once being a living place, particularly good are the propaganda reels you can watch. 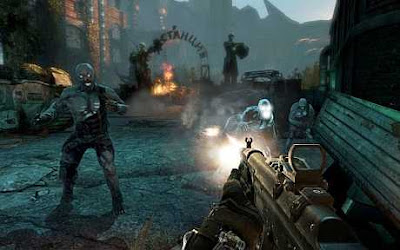 The game looks and plays great but does feel like at times it takes so much from games that have come before.  It has its Half Life 2, Bioshock, and F.E.A.R moments and does not really do anything more than imitate them.  Entertaining and fun but a weak plot, and bland locations stop this from being a must play game.