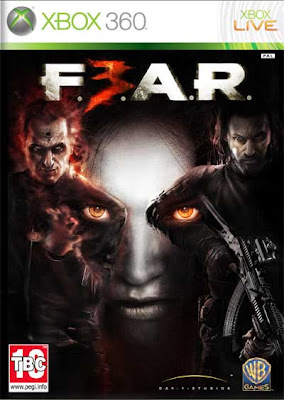 I recently played through the F.E.A.R series again and then saw F.E.A.R 3 cheap so picked it up.  It quite average reviews when it came out, but having enjoyed the other F.E.A.R games I was looking forward to playing it, though kinda put off by the fact that it sounded like it was now geared towards co-op play.

Set 9 months after F.E.A.R 1 and 2 the game starts with Point Man (the silent protagonist of F.E.A.R) who has been captured by Armacham (evil corporation of the game world) and is being kept in a ruined prison complex in what appears to be South America.  His brother Paxton Fettel (one of the main antagonists of F.E.A.R, now a ghost after being killed by Point Man) frees his brother so that they can go back to Fairport where their mother Alma (spooky ghost woman who is pregnant after raping the protagonist of F.E.A.R 2) is about to give birth to god knows what.  Battling both the forces of Armacham, and the insane residents of Fairport the two must discover where their mother is. 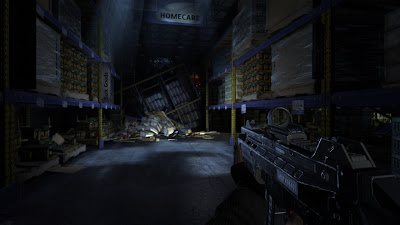 The game certainly feels like a F.E.A.R game, plenty of intense shoot outs, use of slow down, and realistic environments. I always love how F.E.A.R usually sets its levels in locations that feel real rather than levels in a game.  This time around locations include the slums of South America, a supermarket, suburbs, an airport and City streets.  All are great fun to fight through and have incidental details such as signs, fake products, and objects, though it is a bit off putting that signs with convenient arrows usually are placed to guide you where to go next).  The suburbs in particular are kinda creepy, ruined house with walls covered in bloody symbols, and one solitary pram coated in blood.  The back story is that when The Vault was destroyed in F.E.A.R 1 (and 2, and F.E.A.R Files) it released a psychic wave that turned everyone caught in it into psycho cultists who draw Alma symbols everywhere, and mutilate themselves. Making the already devastated City into even more of a Hell hole.  The only sane inhabitants are the security forces of Armacham, everyone else is mad or dead.  How a City such as this was able to be completely destroyed and trashed by one corporation without the rest of America knowing is kinda a bizarre plot hole.

As usual the main people you will be fighting are soldiers who come in a variety of guises.  They hide behind cover, attempt to flank you, and panic when their squad members are killed.  Their Commanders are ace, giant armoured soldiers who can teleport through portals, usually walking out of the wall behind where you are hiding.  Cultists bring a nice 28 Days Later vibe to the game as they charge you armed with tools, or with explosives strapped to them.  Even with limbs and arms blown off they will keep running towards you, impervious to pain due to being under Alma's control.  Zombies are cool!  As usual some monsters appear, these are as usual blooming annoying to fight, monsters are always bad to fight in the F.E.A.R games. 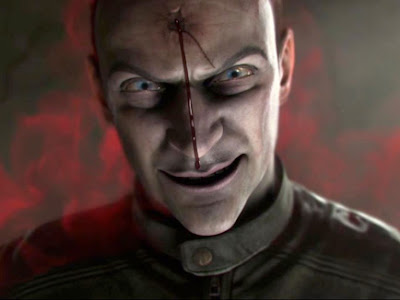 The story is pretty terrible and confusing, and it is a shame that the last level of the game is turned into a dull story based slog through an Armacham facility that culminates in a frankly stupid boss battle.  A poor, boring end to an otherwise action packed game.  Weapons feel like they pack a punch, and some sections where you drive a Mech and fight helicopters, and other Mechs nicely split up the shoot outs.  A nice touch is that Alma's labour pains send shock waves through the City causing gaping holes to appear in the ground, and sending enemy helicopters spinning out of control.

Single player sees you first playing as Point Man, and then able to play as Fettel.  Apparently Fettel being a ghost has to possess enemies to fight, co-op sounds interesting in that he can help out by possessing an enemy and then taking out his comrades while the other player picks them off.  Sounds interesting.  Each player is scored depending on actions they take (such as head shots, and finding psychic links), and at games end the player with the most points gets to have his ending show. 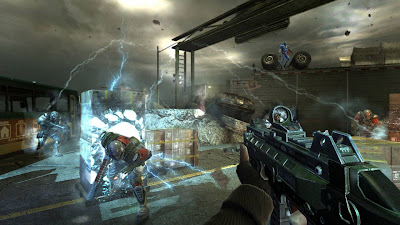 I really quite enjoyed F.E.A.R 3, it does what it always has done, and that is provide solid, bloody shooting action.  Again not at all scary though!