Deus Ex: Human Revolution is the third game in the Deus Ex series but is actually a prequel to the first 2 games, being set 25 years before Deus Ex.  Deus Ex is a first person shooter that also has heaps of RPG elements.  You are likely to spend just as much time talking to people as you are fighting them. The way you play influences how characters react to you leading to a variety of different outcomes.

Set in 2027 and starting in Detroit you are Adam Jensen the head of security for Sariff Industries who are in the field of human augmentations.  An attack at a lab by a group of heavily augmented mercenaries results in the death of Adams girlfriend; scientist Megan Reed as well as him being horrifically injured.  To save his life and with a nod to Robocop he is brought back from the brink of death by David Sariff who outfits Adam with a wide host of augmentations such as robotic arms and legs, and microchips that enable Jensen to become more than human.  While trying to track down the group responsible for the attack Jensen also has to cope with his loss of humanity and an erupting outbreak of violence by Pro Humans who want augmentation banned and people who see augmentation as the next step in human evolution. 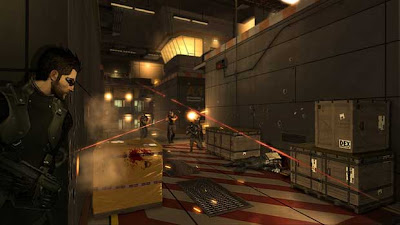 The game like Deus Ex 1 and 2 has a very Blade Runner-esque Cyberpunk feel to it.  Set mostly in Cites the world is a dark, grimy crime filled place full of giant neon signs where the divide between rich and poor is massive.  The main locations are Detroit where Sariff Industries HQ is located, and Heng Sha Island in China.  Heng Sha exemplifies the rich and poor divide best having had a new City built on top of the old.  Above the rich live in granduer while below are slums full of whore houses and night clubs run by private military companies and the Yakuza.

The Cities provide a main hub to the games missions.  You always have your main quest line to do.  These usually involve you flying off to some self contained location to do a mission such as freeing hostages from a terrorist group at a lab, or infilitrating the HQ of a rival augmentation company.  Side missions are provided by characters hanging out in the hub areas.  These missions are usually quite simple, though varied enough not to get boring. 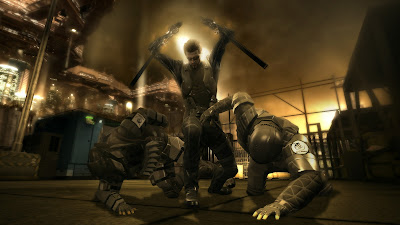 As you earn experiance new augmentations can be brought as well as old ones upgraded.  You can for instance gain the ability to fall from any height without taking damage, gain the ability to smash through walls with your fist, jump large distances, hack locks, breath poison gas, and a host of others.  These abilities are mostly all cool and give you a real advantage in battle and sneaking around locations.

You have a set space to hold weapons and items you collect, the usual assortment of pistols, machine guns, shotguns etc are avaliable.  These can all be upgraded by buying upgrades from black market sellers.  I found the most useful weapon I had was my pistol.  Upgraded to do more damage, a bigger cartridge, silenced, and a laser sight made it awesome. 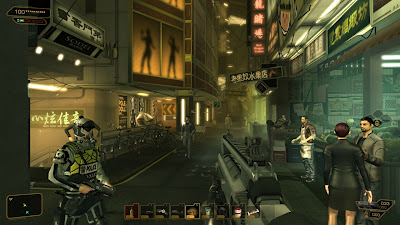 The game is not really designed to be played as a traditional shooter.  It is at its best when you try to avoid combat by hacking security terminals to turn of cameras, or to turn robots and sentry guns against their owners, or bypassing enemies by stealth (you get the cool ability to turn invisible) or by using the many ventilation shafts dotted around levels.  The enemy A.I is kinda terrible so if you do engage in combat you can useually stay in one location while a line of enemies engage you one at a time until all are dead.  The boss battles are at odds with the game design though being compulsary shoot fests.

Human Revolution looks quite attractive, the mian colour used throughout the game is a golden hue.  The human animations are not that great, when you speak to characters they tend to fling there arms about in a weird way, and some of the character models are not that great.  The main cast is voiced well though, especially David Sariff who has an excellant voice actor.  Plot wise things are not that great, the story keeps you going on with a conspiracy by world leaders but there are not really any great surprises or hooks to keep you wanting to see what happens next.  The last part of the game does ramp up the story a bit though. 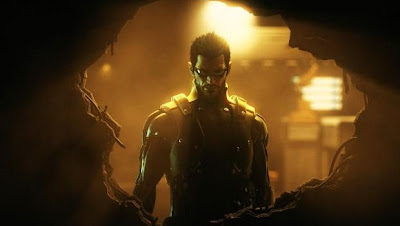 For the most part you fight normal humans, with only the boss battles really using augmented ones.  You get into narration based battles as well, such as using options to stop a man from commiting suicide, or talking a gun man into giving up his hostage he is holding at gunpoint.  These talky battles have no wrong outcome, if the man kills himself, or the gun man kills the hostage the game adapts to deal with that outcome.

It took me around 20 hours to complete I think, I had fun but the last 5th did get a bit tired.  It really does feel like a Deus Ex game, I was reminded heavily of the past games, especially the last part where you get to choose your ending.  This is no bad thing, I enjoyed the other Deus Ex's.  It is just a shame that there is not a more diverse setting to the game, the offices and facilities all start to blend together a bit. 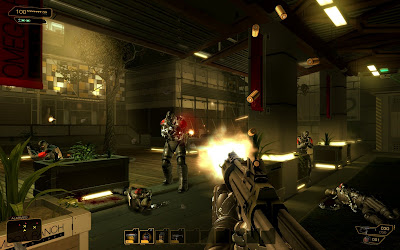 A great game despite my complaints, a nice breath of nostalga even if the genre has been bettered by the open worlds of Fallout and Elder Scrolls.