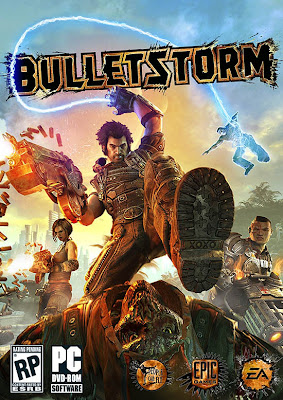 Bulletstorm is a FPS action game that comes from Epic Games (creators of the Gears of War series).  The game is comical and action packed full of humorous violence and bucket loads of profanity.

Grayson Hunt and his crew have been hunting all over the galaxy for their ex commander General Sarrano whose orders led to them accidentally killing innocents.  Finally locating the General aboard his battle cruiser; The Ulysses Greyson drunkenly rams his ship into it hoping to kill the General.  Instead both ships crash land on the nearby planet Stygia.  Escaping the wreckage Greyson soon discovers the population of the planet are a bunch of murderous psychotic mutants.  Battling through the hoards Greyson and his injured cyborg crew mate Ishi set out to find the General. 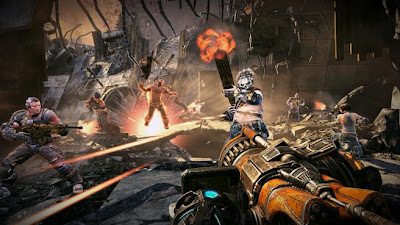 The game reminded me a lot of Gears of War, the design of the characters just brought to mind the Gears but this game is a far more jaunty, comedic, yet incredibly violent one.  Killing enemies rewards you with skill points with which weapons can be upgraded, and ammo brought.  The more inventive ways you kill enemies the more you get rewarded.  Kicking enemies off ledges reward you with the Vertigo reward, while you get the Compassion bonus if you kill an enemy after shooting them in the nether regions for example.  There are loads of different skill points which range from impaling enemies on spiked surfaces, setting them on fire, shooting them in various parts of the body, or using your trusty leash to manipulate them into objects and creatures.

Your most trusted utensils at your disposal are your foot and your leash.  Kicking an enemy causes them to go flying backwards in slow motion giving you time to set up a suitable kill, your leash does the opposite grabbing far away enemies and flinging them towards you in slow motion.  The usual assortment of sniper rifle, machine gun, pistol and (four barrelled) shotgun makes their appearances and are joined by more different weapons such as a grenade on a chain that wraps itself around enemies before exploding, bouncing mines, and a rocket powered spear gun that spears enemies and pins them to walls.  All these weapons are violent causing enemies to blow apart, loose limbs, and heads, as well as be ripped in half. 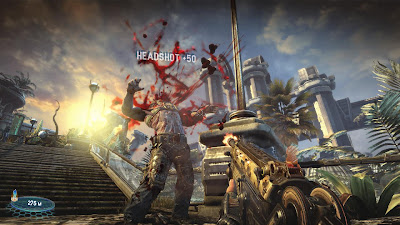 The locations are surprisingly diverse, in fact the variety is one of the most exciting things about this game as they all look beautiful and really solid with the Unreal Engine used to great effects.  The backgrounds are stunning, one level sees you with magnetic boots walking down the side of a sky scrapper with the City below, another sees you working your way around a giant dam with the dam stretching out into the distance.  The planet you are on was created as a resort planet so there are plenty of beautiful vistas, night clubs, parks and tourist attractions.  Also mixed in with these are prisons, spaceships and caverns all looking amazing in their own right. The world feels like a real place with explanations for everything really.

For the most part it is all shooting but it never gets stale due to the different level designs such as working your way through a collapsed building, controlling a giant mechanical dinosaur, or an on rails segment fighting a Godzilla sized beast rampaging through the City. Full of cursing and inventive swearing and genuinely funny moments that are just insanity with witty dialogue.  The voice actors are all good, though the character of Ishi himself is a bit boring and plain. 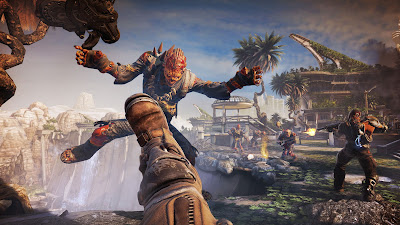 The plot is certainly basic but is well told, at its heart it is a revenge story with your character Grayson Hunt on the tail of General Sarrano whose manipulations cause you to murder hundreds of innocents while under his command.  As Triskha says later in the game, its less about revenge though and more to do with atonement, after all it was Grayson who did all the killing, and it was his mission to destroy Sarrano that led to the death of his crew mates, and the mutilation and change of Ishi so if he can just do what he set out to do he will be able to feel less guilty.  The story of how the planet came to be over run with psychos and mutants is well told with visual imagery to suggest a hasty evacuation, and later a lot of the back story is filled out by the people you team with who relay rumours.

A very enjoyable game that looks and sounds great, apart from a weak story ending the games pace never lets up with action sequence after action sequence. Violent and great fun.

Posted by Daniel Simmonds at 11:56