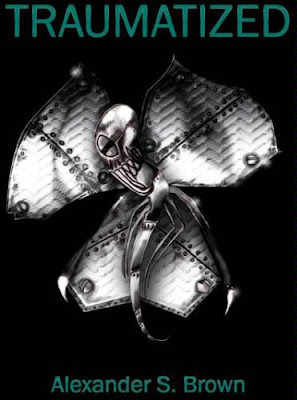 Traumatized is a collection of horror stories all penned by Alexander S. Brown. The book is just over 300 pages, and the font size is not large to make up for the length.

I was quite concerned after reading the first tale 'Bloodlines', concerned as I did not remotely enjoy it.  The story featured a haunted mansion but it plodded along so slowly that I was quite bored, it doesn't help that it is the longest story in the book. The next story 'April' was better but still I just found myself not enjoying it.  It was halfway through the third tale (about a religious cult) that something clicked, I realised I was really enjoying it, glued to the book.  From that point on the book had me in its thrall. Story followed story with me completely addicted to what would come next. There are so many different types of horror that it seems crazy this all come from the mind of just the one person.

The book has ghost tales, ones about serial killers, vampires, demons, witches, and even my favourite creature the zombie! 'From Midnight to One' (about a woman living out in the middle of nowhere whose home gets invaded) actually caused me real fear, previous to this H.P Lovecraft was the only author able to scare me.  I confess that after reading that particular story I had to get out the house and go visit a friend for company! Another truly scary one is 'It's All True' about a man visiting an abandoned hospital in order to do research on a new book.  Both given me the fear just thinking about them!  At other points Browns work starts to resemble Bret Easton Ellis's American Psycho or Chuck Palahniuk's Haunted going really grim and disgusting with 'Live Through This' (an unpleasant story about a homosexual rapist) and final story 'Zoe's Swan Song' (a celebrity seeking perfection).  I really thought I was going to vomit reading it, the descriptions are so detailed and horrific, but I could not stop reading despite feeling faint!

A lot of the time the endings to the stories are heavily signposted (literally in the fantastic 'Two Miles' about a mobster who wakes up in a burning hot desert with no memory of how he got there) but this doesn't stop the enjoyment of finding out how the story gets to that point.

The writings reminded me of spoof horror writer Garth Merenghi; titles such as 'Feast of the Pigs' (about Police who eat their prisoners) had me in stitches as the concept is so ridiculous yet played so straight faced. Brown does dabble in similes far too often, seeming to include them whenever he can, but some are genius and whether intentional or not quite funny (example; 'She appeared similar to a decaying clown from hell').  He goes a bit too graphic for my likings sometimes, sex scenes invariably are too detailed for my innocent mind to like.  On the other end of the scale some of the violence is crazily over the top and looses its impact on occasion.

Regardless of all this I can say with hand on heart that with the exception of H.P Lovecraft and Edgar Allan Poe this is the very best horror anthology I have ever had the pleasure to read!  Brown's imagination is unrivalled, being able to take so many generic horror ideas and craft them into entertaining, pulpy stories that don't challenge the mind but do just satisfy that particular horror itch we all have. He has a real gift, and is certainly a true Master of Horror.

Despite a false start the book is a highly entertaining read, Brown is a talented writer able to conjure up fear, disgust, and humour as well as live up to the standards of pulpy horror . I look forward to what he does next!